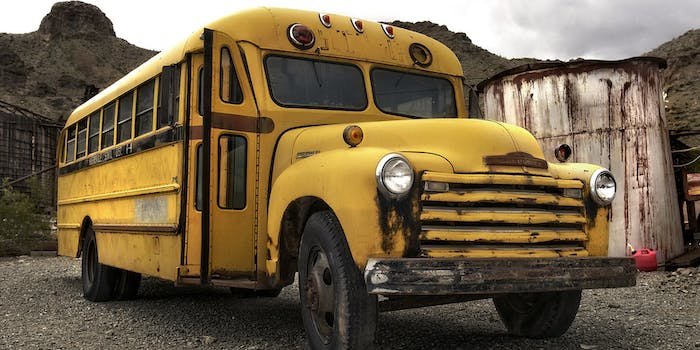 Houston mayor Annise Parker took to Twitter to defend the bill, but there is no argument for throwing trans rights under the bus.

During her inauguration in January, Houston mayor Annise Parker announced her support of a city-wide non-discrimination ordinance, emphatic about the need for inclusion of both sexual orientation and gender identity within its protections. “Diversity where ideas meet and those seeds germinate can be a garden of plenty,” Parker said in her address. “To ensure the full participation of every Houstonian in the business and civic life of this great city, it is time to pass a comprehensive nondiscrimination ordinance that adds sexual orientation and gender identity to the protections most Houstonians take for granted.”

However, Tuesday night, after the ordinance sparked controversy, Parker stripped the language providing protection for transgender and gender variant individuals to use restroom facilities corresponding to the gender with which they identify from the bill—to the outrage of transgender activists, allies, and anyone not possessed by paranoid bigotry.

Parker tried to reassure those angered by her compromise, taking to Twitter to head off the firestorm. “To my trans sisters/brothers: you’re still fully protected in Equal Rights Ordinance,” she said. “We’re simply removing language that singled you out.” It didn’t seem to have much of an effect, as her critics responded by pointing out the dangers in the removal of specific language protecting transgender individuals and voicing their frustration at feeling “thrown under the bus.”

However, this is not the first time that transgender individuals have felt thrown marginalized in the name of advancing the interests of the LGB part of the LGBT acronym. The trans community has historically had an uneasy relationship with the Human Rights Campaign, the largest organization in the country dedicated to advancing LGBT causes. In 2013, during a rally for marriage equality, a transgender individual carrying a transgender pride flag was allegedly asked by HRC field director Karin Quimby to put the flag down, because the rally was “not about the trans community.”

In 2007, when a newly-elected Democratic caucus was enthusiastic about passing an employee non-discrimination act, it was first drafted with transgender protections included. However, that language was eventually removed by Barney Frank in the version he proposed; he felt that the bill would have a better chance of passing without explicit protections for gender identity and expression. When the language was stripped, hundreds of LGBT organizations—with the glaring exception of the HRC—campaigned against a bill that failed to include transgender protections.

Even so, the non-inclusive version of ENDA failed to pass.

It’s not hard to see why transgender people would be outraged when their rights to safety have, yet again, been deemed unimportant and discarded in order to pass LGB legislation. While the attitude behind exclusion of transgender individuals is, in essence, that something is better than nothing, the message sent is that transgender people do not matter—and that their rights are somehow controversial. This creates a self-fulfilling prophecy in which even within an environment that is increasingly supportive of rights for gay, lesbian, and bisexual people, transgender and gender variant individuals are left behind.

Annise Parker herself is famous for being the first openly lesbian mayor elected to the mayorship of a major metropolitan city—the 4th largest in the country. The LGBT community looks to her as a leader. Her actions affect a lot of people and serve as an example for the rest of the country.  When she offers up a bill that excludes transgender protections as a “compromise” in response to unfounded claims about transgender people being sexual predators, or that their gender identity is somehow up for debate, it shows the rest of the country that bullying tactics win; in order to placate these bullies, transgender people are an acceptable sacrifice.

Parker, as an outspoken LGBT advocate with the platform that her mayorship brings, had an opportunity to stand up to those bullies and send a powerful message of inclusion. Instead, she backed down in the face of blind hatred to advance the interests of some over the interests of all, and, like with ENDA, it didn’t even matter. Protesters continued to take to the streets in opposition to the non-discrimination ordinance, because they don’t want compromise. They want to impose their ideology of hatred onto the rest of society, and they will not settle for the marginalization of one group alone.

If prominent individuals like Parker don’t stand up to this kind of hatred, it will continue to manifest itself in similar situations across the country.

Indeed, the efforts to prevent the passage of a transgender inclusive non-discrimination ordinance in Houston parallel recent efforts in Maryland to repeal transgender inclusive legislation that has already passed, fueled by the same lies and fearmongering tactics. These protections are important, because despite the rhetoric, it is transgender people themselves who are at risk of violence or harassment for using facilities that do not correspond to their gender identity. In stripping these protections from Houston’s non-discrimination ordinance, Parker enabled the forces of hatred and gave them a platform in the shaping of LGBT legislation. This is no strategy for success.

Transgender people are growing tired of those who hate everything about their existence having more of a say in their lives than they do. It’s even more frustrating when allies who have a platform that most transgender people do not, cede protections for transgender individuals immediately in order to advance their agendas and personal standing.  Instead of trying to satisfy people who will never be satisfied by abandoning transgender people, LGBT leaders like Parker should take a proactive role and live up to their advocacy credentials by showing solidarity with all members of their community.

Transgender rights are human rights—and they are of no less importance than the rights of the rest of the LGBT community. They should not be forfeited in the name of political expediency.