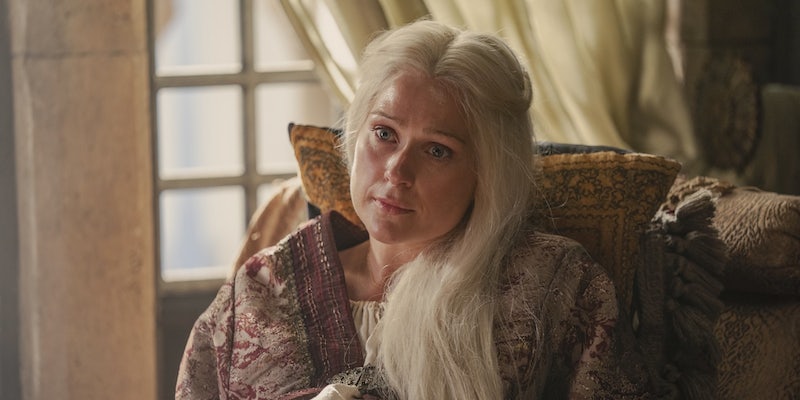 The parallels to our world aren't difficult to discern.

Warning: This article contains spoilers for House of the Dragon and Fire & Blood.

With the series premiere of House of the Dragon on Sunday night, viewers were transplanted back to Westeros for the first time in over three years. But in the middle of introducing many of the show’s major players, an outpouring of lore, and the succession crisis at hand, it gave us one of its first brutal death scenes, which is already proving to be divisive.

Around halfway through “Heirs of the Dragon,” King Viserys I Targaryen (Paddy Considine) is attending a tourney being held in honor of the upcoming birth of his child. He’s already aware that his wife, Queen Aemma (Sian Brooke) is in labor, which he announces to the crowd, but soon, he’s pulled away from the tourney because the birth is not proceeding as planned. He is quickly informed that the baby is breech, meaning that they’re positioned feet first; all attempts to turn the baby around have failed. Grand Maester Mellos (David Horovitch) pulls Viserys aside to discuss options, neither of which are good.

“During a difficult birth, it sometimes becomes necessary for the father to make an impossible choice,” Mellos explained. “To sacrifice one, or to lose them both. There is a chance that we can save the child. A technique that is taught at the Citadel, which involves cutting directly into the womb to free the infant.”

The resulting blood loss from the procedure would mean that Aemma would die. And Mellos urges Viserys to choose quickly, noting that “We must either act now or leave it with the gods.”

Viserys is horrified, but he’s desperate for a son, so he chooses the baby. He might look apologetic and mournful when he tells her, “They’re going to bring the babe out now,” but he does not inform Aemma of what’s about to happen or that he just effectively ordered her death. In one moment, Viserys is telling Aemma he loves her, and in the next, she’s being held down by several maids while a maester takes a knife to her stomach for a barbaric, medieval cesarean section. Throughout the entire procedure, Aemma has no agency over what happens to her body, she’s not told what any of the maesters are about to do to her, and nobody listens to her when she figures it out and tells them to stop. She’s treated more like a problem to solve than a person by the men in the room; even the act of removing the baby out of Aemma’s womb after her death is done with little care.

The baby, the son Viserys always wanted, is named Baelon, but the baby dies within a day. Even if Viserys’ daughter Rhaenyra isn’t aware of the exact circumstances that led to Aemma’s death, she’s angered and bitter in her grief as she tells her uncle Daemon (Matt Smith), “I wonder if, during those few hours my brother lived, my father finally found happiness.”

The sequence, which is intercut with scenes from the tourney and culminates in a joust and swordfight between Prince Daemon Targaryen and Ser Criston Cole (Fabien Frankel), is one of the more graphically violent scenes in both House of the Dragon and Game of Thrones to date. It’s horrific to watch, even though we might not have known Aemma for long: In one of her few scenes, Aemma tells Viserys that she doesn’t want to have any more children after this one because she’s already dealt with multiple infant deaths, miscarriages, and stillborns and she’s tired of mourning dead babies.

While Aemma informs her daughter Rhaenyra (Milly Alcock) that “Childbirth is our battlefield,” it’s not one that women of Westeros often get the choice to partake in: Their duties to the realm, or their families, are to marry and bear children, even if it kills them; if it comes to choosing which person to save, it will never be them.

For some viewers, the scene was too much even in terms of the level of violence in a show based in the same world as Game of Thrones while others mocked the level of “historical accuracy” that Martin and the creative forces behind the show adhered to when depicting certain events in the show (such as showing violence against its female characters).

“Each birth in this show has a theme, just as the battles I’ve filmed in the past have a central concept. The theme of this birth scene was ‘torture,’” co-showrunner Miguel Sapochnik, who directed the series premiere, told the Los Angeles Times in an email. “The hope and intention of the show — beyond the primary one of entertainment — is to shine a light on how the experience of men and women in this world has parallels to our own past and present.”

Speaking to Vanity Fair, co-creator Ryan Condal added that the scene is “not meant to be gratuitous,” and he wanted to draw parallels between the kind of battles that men and women in Westeros face.

“There’s this whole idea in Game of Thrones, or in the Middle Ages, or in historical age like this, that the men marched off to the battlefield and the women’s battlefield happened in the child bed,” Condal explained. “That was a very dangerous place to be. All of the complications that people go through in modern birth that are now fixed by science and medicine and surgery were not really possible back then. Any slight complication, anything could lead to very tragic consequences for the child and the mother.”

Condal also pointed to Fire & Blood, which details several difficult births. The version of Aemma’s death in Fire & Blood might not be as detailed or gruesome as what House of the Dragon depicts—the fates of Aemma and Baelon are contained in two sentences in the book, and even more information is included about Aemma’s mother, who also died in childbirth—but there is a remarkably similar story with another woman in the Targaryen line.

Alyssa Velaryon had six children with her first husband, King Aenys I Targaryen (including Jaehaerys, the elderly king we saw at the beginning of House of the Dragon). After Aenys’ death, she married Rogar Baratheon and had two more children, Boremund and Jocelyn. Alyssa’s second pregnancy with Rogar was difficult due to her age, and the birth led to another impossible choice: Save the baby or let them both die. (Rogar, though stricken with grief, chose the baby.)

In one account of events, one that possibly puts a rosier spin on things, Alyssa was informed about what was to happen—a luxury Aemma never got—and she agreed with the course of action; in another version, Alyssa never woke up. The baby, named Jocelyn, survived, and she eventually became the mother of Rhaenys Targaryen (Eve Best). But the events leading to Alyssa’s death were so upsetting to Alyssa’s eldest daughter Rhaena, who blamed Rogar for killing her because he didn’t choose his wife when it came down to it—and for getting Alyssa pregnant in the first place even after Rogar got his male heir—that she threatened to personally kill Rogar if he ever got married again. (He never did.)

And mothers dying in childbirth is also a somewhat common cause of death in A Song of Ice and Fire: Three of the main protagonists in that series (Daenerys Targaryen, Jon Snow, and Tyrion Lannister) all had mothers who died in such a manner, although it’s never specified (or depicted) in those cases if a c-section was involved.

Sapochnik told Insider that he showed the scene to several women for feedback about whether it was too violent or excessive, noting, “unanimously, the response was ‘no.’ Often the response was ‘If anything, it needs to be more.’”

“We shouldn’t be shying away from this thing that’s happened because it’s raising a point that seems to hit a real trigger for women, which is this idea of choice,” Condal explained to Insider. “[Aemma] doesn’t get to choose. She’s effectively murdered by her husband. And that is a good indication of the state of play in this world that we’re inhabiting.”

In that sense, the scene was incredibly effective. Even though the scene was shot well before the Dobbs decision, it’s hard not to watch that with several real-world factors in mind. The sheer technology factor might be monumental—c-sections aren’t an instant death sentence for those who need them, although the procedure can still be risky—but it can still be dangerous to give birth today, even in countries like the U.S. It also doesn’t take much to notice similarities of other elements surrounding Aemma’s death and how we treat pregnant people, from the lack of choice she had in what was to be done to her body, the lack of information she received about it. Even Aemma having to go through numerous pregnancies because of the will of her husband even after those pregnancies mentally and physically harmed her harken to how some view reproductive healthcare in a post-Roe America and how being forced to have children dehumanizes people as some view them as little more than a vessel for a new life.

It’s an incredibly different kind of shock factor than Game of Thrones starting by pushing Bran Stark out of a window, but the effect is very similar in both shows: It struck a massive nerve.