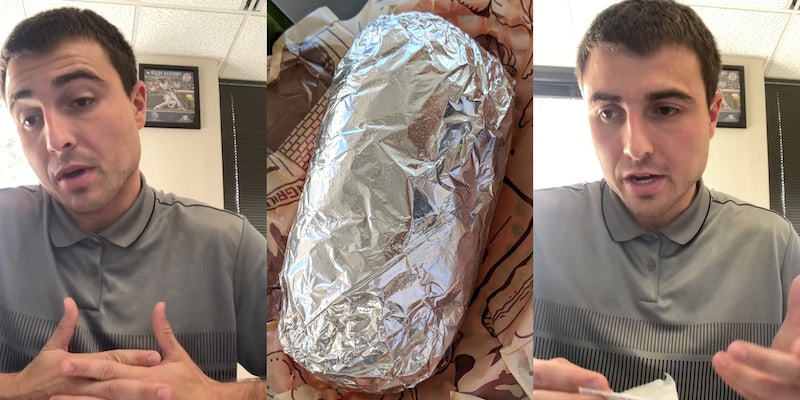 ‘Bro got a refund’: Man asks Hinge date to pay him back for Chipotle—because they’re not going on a second date

'I was wondering if maybe I could text you my Venmo and you could just kinda pay me back for that meal.'

TikToker Big E the Insurance Guy (@bigetheinsuranceguy) regularly creates comedic sketches touting his insurance firm’s ability to sell insurance to folks without employing or working with sex offenders. Despite his unconventional marketing methods, Big E (Elijah) does state that he is an actual insurance agent who is focused on “Saving you money and NOT sex offending,” which he states on his website.

Big E, or Elijah, recently went viral with a clip that lampoons two common trends that have been popping up on social media: guys asking for their money back after a first date didn’t go the way they had planned, and Chipotle pricing slander.

“This past weekend I went on a Hinge date to Chipotle and I paid for this girl’s burrito she got steak and guac in it, but we’re not going on a second date so I’m gonna call her and see if she will pay me back for it,” Elijah says in the video.

The clip then cuts to audio of a phone call, as he waits for the date to pick up.

“Hello?” A woman’s voice can be heard answering the phone.

“Hey Lucy, Elijah from Goodman Family Insurance and Chipotle this past Saturday. How’re you doing?” he asks.

“Good, so listen I was, uh, thinking about this past weekend,” Elijah says. “And when we went to Chipotle I paid for your burrito which you got steak and guac for which, you know, is fine, but since we established we’re not going on a second [date], I was wondering if maybe I could text you my Venmo and you could just kinda pay me back for that meal.”

“Appreciate it Lucy,” he responds, before pulling out a receipt. “Yours was roughly like thirteen dollars, it was a little over that but I’m cool with thirteen.”

“OK, yeah I guess I can do that,” she concludes.

“Awesome,” he says. “I’ll Venmo…I’ll text you my Venmo now,” Elijah says before thanking her and ending the phone call.

In the comments section of the video, he added, “I’m not proud of this but money is tight right now.”

Some users on the platform seemed to be cued in on the joke, while some left comments that suggest they may have thought his phone call was legitimate.

“Cost of doing business brother. write it off,” one user joked.

“This should be in every corporate sales training video. Impeccable hook, upsell, and close,” another quipped.

It does seem like Big E’s videos are working to promote his insurance business, however, as other commenters asked what kind of plans the content creator specializes in. “Hey big E, what kind of insurance do you even sell? I’m genuinely interested in switching over to you for whatever it may be,” one user asked.

There are tons of different outlets that write about the different ways folks are using social media applications, like TikTok, to promote their individual businesses. A lot of different marketing resources, however, focus on more “traditionally professional” pieces of advice, like how to utilize different features each app offers (like the implementation of hashtags) and other generic bits of wisdom.

It’d be hard to imagine that anyone would instruct viewers to tout the fact that they’re not a sex offender in order to sell insurance plans, but Big E demonstrates a good example of creating unique content. Using his comedic bits, he’s been able to establish a sizable online audience. He currently has over 90,000 fans on TikTok with over 2.6 million aggregate likes on the platform.

He’s listed as a Producer for the firm, according to the Goodman Family Insurance website.

The Daily Dot has reached out to Elijah via LinkedIn direct message for further comment.