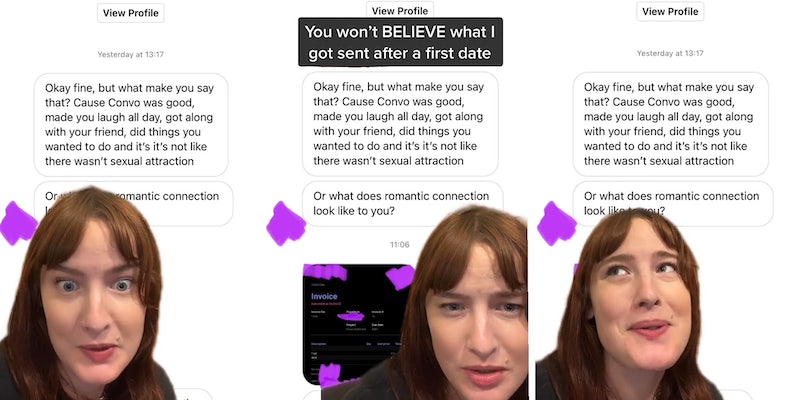 ‘You can’t invoice someone in retrospect because you didn’t get what you wanted’: Woman receives invoice from guy after unsuccessful first date, sparking debate

'If money is that tight you should have let me pay in the first place.'

If the modern dating world has taught us anything, it’s that as far as first dates go, successful ones are few and far between. A woman on TikTok proved that right once again by sharing the surprising aftermath of a date gone wrong. TikTok user Fiona Hope (@fifihopes) went viral on the platform after revealing a man invoiced her after their unsuccessful first date.

“You won’t believe what I got sent after a first date,” the overlay text on her viral video reads. In the clip, Hope explains that her first date with the man went well enough, despite her not really fancying him. According to Hope, he kept asking inappropriate questions about her sexual history, which did not sit right with her. At the end of dinner, Hope says the man insisted on paying despite her offering to do so.

The problem arose when Hope mentioned she had plans with a friend afterward, which she says the man did not seem to like. She explains that she ended up inviting him along because she felt bad. This proved to be a mistake, she says. At the end of the date, they shared a kiss but she says she was “really not feeling it.”

The man then messaged her on Instagram to follow up but Hope says she politely declined any plans for a second date. In the clip, she shares a screenshot of the message he sent where he questioned her decision and asks what a romantic connection looks like to her.

“Well, not that, mate,” Hope says in response to the question. “So what do I get? I get fucking invoiced.”

Hope shares an image of an actual invoice the man sent her for £29.

“The cheek of him! Would you pay?” Hope asks her viewers. “Because I don’t feel like I’m a commodity and if I don’t give in then I should pay someone back.”

Hope continues that she understands it can be frustrating to spend money after not getting what you want. But she suggests dates be open to splitting the bill if that’s the case.

In another video, Hope says the man insisted that it “wasn’t a matter of money, it’s the principle.”

Both of Hope’s videos about the incident have gone viral, having amassed more than 600,000 altogether as of Friday. In the comments section, the majority of viewers were appalled at the man’s behavior after not getting what he wanted, which Hope implies was sex.

“Nah you can’t invoice someone in retrospect because you didn’t get what you wanted out of the situation,” one user wrote.

“He should be embarrassed,” another agreed.

“FYI You’re allowed to go on a first date and have a kiss and decide to not be interested after. Does mean you’re leading someone on. Jesus,” a third argued.

Others shared their responses if they were in Hope’s shoes.

“if money is that tight you should have let me pay in the first place,” one user wrote.

“if I had the money I would send him the money for the whole bill and said something like “sure didn’t realize you needed help with that” and blocked him,” another said.

Many male viewers, however, felt differently. In Hope’s second video, several men in the comments sided with her date.

“wait your telling me you have to PAY for the food YOU ate….???” one sarcastically commented.

“I mean £29 is 3 hours of work for some ppl. The date is already a waste of time no reason he should have to pay £29 for ur food and drink,” another reasoned.

“Yes, he’s absolutely entitled to this,” a viewer wrote.

Several others wrote that Hope should’ve split the bill if she knew she wasn’t interested. She responded to them in an updated comment.

“JUST TO CLARIFY, I offered to pay several times and he was extremely insistent. I’m not going to beg to pay,” she wrote.

The Daily Dot reached out to Hope via Instagram direct message.