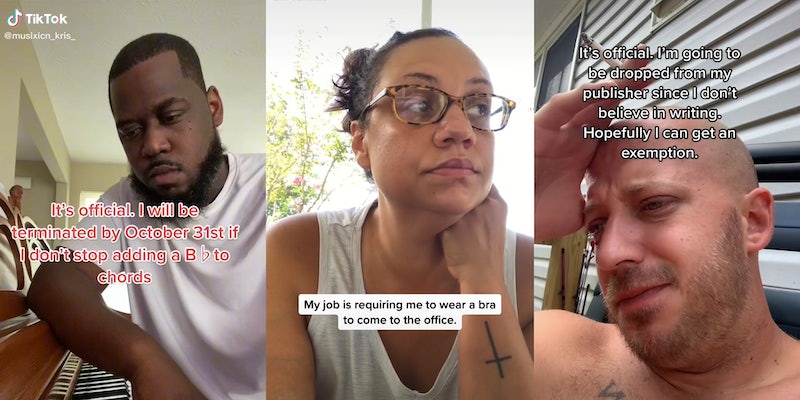 They're mocking the people who would get mad enough to cry in a TikTok.

COVID-19 vaccine mandates are becoming increasingly popular as more employers consider or enact vaccine requirements for those coming into the office. It’s a move that’s not going over well with many anti-vaxxers, whose breakdowns are being parodied by TikTokers with the help of a nearly decade-old Christian song.

On its own, “Oceans (Where Feet May Fall),” which is by the group Hillsong United—and affiliated with Hillsong Church (yes, that Hillsong)—might be seen as inspirational. The lyrics reference Matthew 14:22-32 in the Bible’s New Testament when Jesus walks on the water and calls for Peter to come to him. Released in 2013, it was no. 1 on the Billboard Hot Christian Songs charts for 61 non-consecutive weeks and has been covered numerous times since.

In May, a snippet of Hillsong United’s performance of “Oceans (Where Feet May Fall)” at Hillsong Conference was uploaded to TikTok. The audio clip features the song’s bridge, and after the first lyric, the crowd joins in to sing along.

“Spirit lead me where my trust is without borders

Let me walk upon the waters

Wherever You would call me

Take me deeper than my feet could ever wander

And my faith will be made stronger

In the presence of my Saviour”

A few TikTokers used the song in June to honor a member of the biking community who had recently died, but in recent days, the song has taken on a life as its own to parody anti-vaxxers by using other examples of safe or life-saving measures used to protect employees and customers. (The choice is somewhat ironic given that Hillsong Church’s founder believes that COVID-19 vaccines are a “personal decision for each individual to make.”)

For example, TikToker Chelsea Hart is upset about losing their job as a lion keeper because they just wanted to let the lions out to eat people.

@tizzyent is upset about government mandates like requiring a CDL license for him to drive his truck.

Should nursing students have to prove that they’re student nurses before working with patients? One TikToker doesn’t think so, but he, like many others, is really just illustrating a point.

The other big conundrum? Whether to email a photo of a vaccine card or showing it in person?

And some people don’t think they should be forced to wash their hands before interacting with patients or customers.

Some TikTokers are looking to pull the rug from under viewers’ feet by making it seem like their parodies are anti-vax until the last minute when the punchline is revealed.

Take @chknlip, who’s upset about vaccine mandates because the person she couldn’t stand at work is responding to the mandate by actually getting the vaccine.

And sometimes, the requirements to go back to the office are both much more trivial and silly.

“Such hard decisions when you aren’t busy playing victim to your own decisions,” @ziasiciliana wrote in a TikTok all about the struggle over what to pick up for dinner.

But the song isn’t just rife for parody: There’s at least one person who used the song to show how legitimately upsetting the vaccine mandate is.

It’s too soon to tell if irony is dead, but until then, TikTokers are getting really creative about how they choose to mock those against a vaccine mandate.