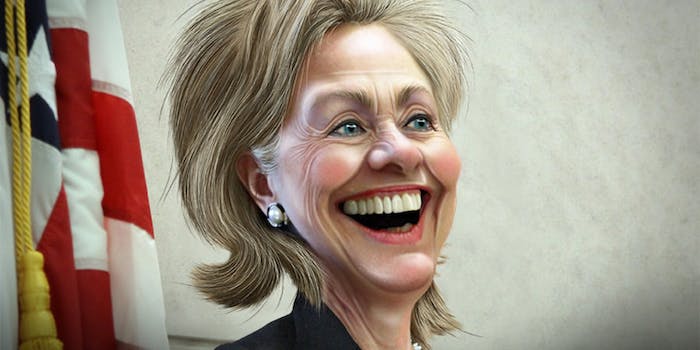 The shocking truth behind the Hillary Clinton email scandal

Presumed presidential candidate Hillary Clinton is currently facing the largest controversy of her campaign before she’s even announced. Numerous reports have revealed Clinton, during all four years of her stay as Secretary of State, exclusively used a private email address for official State Department business. The actions are a likely violation of the Federal Records Act, which states each federal agency must “make and preserve records containing adequate and proper documentation of the organization, functions, policies, decisions, procedures, and essential transactions of the agency.”

The method most agencies use to follow the FRA is by sticking with official agency email accounts for all official agency business. In fact, this is a fairly accepted practice across the country in local, state, and federal governments. When Barack Obama was elected to the presidency in 2008, he had his BlackBerry outfitted by the NSA to retain the security standards official government communications must have. Around the same time, Clintonemails.com was registered to a private server within the Clinton’s New York home with no known security precautions.

Clinton’s email account has the hallmarks of a long, drawn-out scandal—the kind that can permanently mark a presidential candidate. The account’s exclusivity (private email accounts cannot be seen under Freedom of Information Act requests) puts HRC and her own team in charge of choosing what official State Department conduct should be released. It’s a position that makes Clinton appear not just suspicious but scheming.

It’s a position that makes Clinton appear not just suspicious but scheming.

And while this might be the largest scandal of its type, it’s far from the only time politicians have used private email accounts—or even the cleansing of official email accounts—to retain power in the face of losing it. Washington’s problem with email crosses both parties and subverts the safeguards of the FOIA and official record-keeping, making investigations into government matters all the more opaque than they already are.

While recent reports suggest Colin Powell likewise used personal email during his tenure as Secretary of State, Hillary Clinton isn’t even the only 2016 candidate to be embroiled in such a controversy. Wisconsin Governor Scott Walker, currently a favorite in the 2016 GOP primary, has been under investigation for the past four years for his office’s use of private email accounts to avoid public scrutiny. And for good reason: The emails to and from the account show Walker’s gubernatorial staff effectively running his campaign for him, a major campaign finance violation in Wisconsin and most states.

While Governor of Massachusetts, Mitt Romney had state email servers wiped clean right before such records would have gone public. Mirroring Romney, IRS official Lois Lerner was held in contempt of Congress for claiming emails connecting her to the undue targeting of conservative groups were lost in a damaged hard drive (however, the emails were “miraculously” recovered). Right before their exit, the Bush administration seemed to misplace 22 million emails over eight years—a scandal Hillary Clinton likely knew well, considering how many of the emails involved the State Department she was adopting.

Clinton’s scandal is merely the most recent case of a growing trend. While the doctrine of “everybody else is doing it” shouldn’t protect Clinton from scrutiny, any analysis of her missteps should include a deep investigation into the troubling lack of transparency with which our government treats official communications.

Clinton’s scandal is merely the most recent case of a growing trend.

As others have noted, Clinton’s use of a private email server—over a service like Gmail or Microsoft Outlook—presents its own special brand of security as well as transparency risks. Federal agencies do not disclose how they secure their email servers or communications between departments, but that makes them inherently safer than services like Gmail. Sarah Palin learned this lesson at the state level when her private Yahoo account—with which she conducted official business as the governor of Alaska—was hacked by a member of Anonymous simply by answering her security questions.

A privately managed email account like Clinton’s, however, rests on unknown security standards. The domain isn’t even registered to a real person, with “Eric Hoteham” evading all public databases according to an AP report. If he exists, Hoteham registered Clintonemails.com on the first day of Clinton’s confirmation hearings in 2009, though the account only came to light from a 2013 hack of the emails by a conspiracy-minded hacker named Guccifer.

The insecurity of Hillary Clinton’s account and the dubious legal basis for its existence should not merely raise questions about Clinton and her presidential ambitions but upon government transparency as a whole. Too many cases of private email use—or the obliteration of official emails—endanger the purpose of the Federal Records Act. Communications of and between government officials need to be accessible within the limits of classified information to preserve an active attitude towards openness, one that doesn’t merely rise when a headline-friendly candidate makes the same questionable action as everyone else.