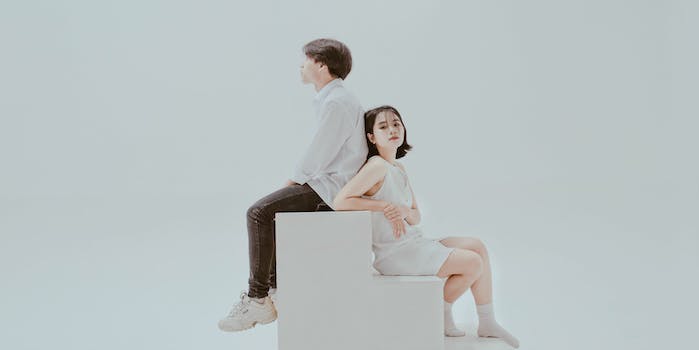 If he takes two hours to write anything, works from his bedroom, and lives on memes, he's probably just a Daily Dot writer.

Leave it to social media to have the perfect dating advice right around the season you have to fly back home and deal with curious relatives. If you’re bringing a partner to this year’s family dinner, it’s a good idea to make sure he, she, or they aren’t Vincent van Gogh, Jake from State Farm, or a raccoon. Thankfully, some folks on Twitter made it clear how to avoid these pitfalls through the helpful “he’s not your man” meme.

The meme starts off with generally pretty good advice—if a man isn’t paying attention to you, either by taking too long to text back or not watching your Instagram stories, for example—it’s clear you’re not actually dating. But then the meme goes on to get weirder, listing characteristics of specific historical or literary figures.

Maybe your new beau is a history major, so make sure you know who you’re bringing to dinner.

Ladies, if he:
-doesn’t text you back
-doesn’t like your tweets
-has a garden of petrified foes
-has eight eyes at the end of writhing tentacles
-rules over a vast criminal organization

He’s not your man. He’s Xanathar, beholder crimeboss of Waterdeep

If politics is a frequent topic of conversation during the holidays, make sure you’re not bringing any dead presidents or alt-right weirdos.

he’s not a man. he’s secretary of education betsy devos

– doesn't respond to your calls & won't meet you in public
– demands you "compromise" by giving him his way
– is funded by shadowy conservative billionaires
– has vague, suspect objections to Pelosi

He's not your man. He's the House Problem Solvers Caucus

And then there are just the weird ones that any self-respecting human should avoid:

-starts eating your food when you leave the room
-can lift 10 times his weight
-calls another woman his queen
-lives in a hill
-has a hard, waterproof exoskeleton made of chitin

He's not your man. She's The Man starring Amanda Bynes and Channing Tatum

And then there’s just the damn truth.

The meme first appeared on Twitter on Nov. 22; since then it’s expanded to address advertising mascots:

Ladies, if he:
– only wants to hang out when he's drunk
– never brings you around his friends
– fingers on his head
– no legs or feet
– always trying to sell you pasta

He's not your man. He’s the hamburger helper glove

He's not your man. He's a Great Hammerhead Shark.

– leaves you on read
– doesn't watch your Insta stories
– weighs up to 1,000 pounds at his fighting weight
– spends all summer eating thousands of salmon from the Brooks River

And, of course, Gritty:

He’s not your man. He’s Gritty

A meme that can be used to reference another meme? Count us in.

Some bigger organizations have gotten in on the meme, with varying levels of success:

– ignores text messages
– spends all of his time at work
– insists he can see phantom limbs
– has encyclopaedic knowledge of ancient physics, logic and astronomy

He's not your man. He's the father of modern economics, Adam Smith

He's not your man. He's a refrigerator.

So, this holiday season, why not get some useful dating advice from a meme? You might learn something about historical figures in the process.