Perfect sequels don’t exist, you say? Well, try telling that to Éirinn O’Kelly. He’s a bearded, Scandinavian-Irish man from Arizona whose YouTube videos about his hats, “Hat” and “Hat Again,” have made him a minor YouTube sensation and a beloved internet meme.

O’Kelly joined YouTube in 2007, according to his “about” page on the site. His first videos didn’t appear until early 2017, though—a combination of comedy about Donald Trump, singing, and videos of the moon. And then came “Hat,” posted in March.

“This is one of the hats that I wear in this crazy state of Error-Zona,” O’Kelly says in the minute-and-a-half video.

The videos are great—just a bushy-faced man talking enthusiastically about his hats—but no one was watching them. O’Kelly remained a complete unknown until early June, when Reddit poster Jacob Blackford found the videos. At the time, their view counts were still in the single digits.

“I actually discovered him through a Facebook group. Someone posted an image of the two hat videos. I saw them, and added the caption, and then posted it to /r/dankmemes,” Blackford told the Daily Dot. His “perfect sequels don’t exist” meme, featuring screengrabs of “Hat” and “Hat 2” was a tremendous hit on the dank memes subreddit, turning O’Kelly into a meme sensation overnight.

Views of “Hat” and “Hat again” skyrocketed. Each video has now been watched more than 200,000 times. Since the meme was posted, O’Kelly has gone from 0 YouTube subscribers to more than 15,000, according to YouTube analytics site SocialBlade:

O’Kelly noticed. The day after he became a meme, he started posting a new series of hat videos. There were a ton of them because this man owns a ton of hats:

But the joke wasn’t just about the hats: It was the idea that the first video was a cinematic masterpiece and there was a very good sequel.

A handful of hats later, O’Kelly caught onto that, too, and posted the hotly anticipated “Hat 3,” featuring a Chicago Cubs cap.

The trilogy was complete, and the meme evolved even further. People joked that the “Hat” series was better than Lord of the Rings: 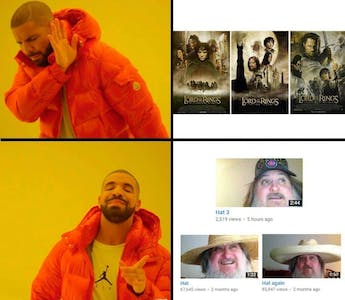 Hats 4 through 8 have been posted since, but they didn’t generate the excitement (and six-digit view counts) of the first three.

Some of O’Kelly’s other videos started to add to his meme legend, though. Even the Moon trilogy, whose entries are just a few seconds long, is getting some love:

On Wednesday, O’Kelly’s fans even got “Hat” to the top of the Internet Movie Database’s best TV show ranking:

The IMDB page for “Hat” describes it thusly: “Eirinn O’ Kelly shows and discusses his various hats. The show is also riddled in social and political satire that is deeply poignant in today’s modern society.”

O’Kelly has truly arrived. But, at this point, Reddit is becoming so saturated with love for “Hat” that a backlash is beginning to form. Here’s a meme suggesting Hat Guy just isn’t funny, and that jokes about him are stealing attention from “dank” original content.

Hat Guy doesn’t seem to care at all. He’s happy to flood the market with hat content to satisfy his ravenous newfound fans, posting hat after hat. Will they get tired of it? Eventually. Will he turn out to be a “Milkshake Duck” who eventually shares an opinion that disappoints his admirers? Very likely! In fact, he already seems to be cultivating a “sexy” video playlist, including “hot girls” and “perfect twerks.”

In the end, we’re all human. Some of us just have more hats than others.