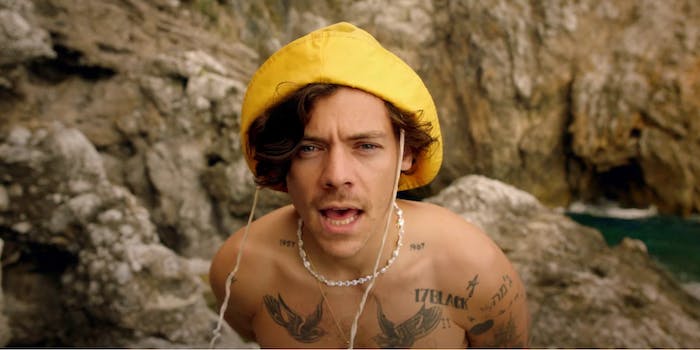 Fans are losing it over Harry Styles’ ‘Golden’ music video

The memes flooded in.

After nearly a year’s wait, Harry Styles released a music video for his song “Golden,” and fans are losing it. The music video received over 1 million likes on YouTube within the first hour it was live on Monday, and Twitter exploded with the hashtag #Golden.

Styles debuted his second album Fine Line in December, and has since released two other music videos for the album: “Watermelon Sugar” and “Adore You.” But the “Golden” music video was highly anticipated, to say the least.

Some fans are saying their nearly yearlong “Fine Line era” was the best year of their lives.

So much so that they could barely handle the hype surrounding the new music video. Memes from fan accounts like @TheNarryTimes quickly flooded Twitter, too.

After recovering from their heart attacks, the fandom was quick to notice the joyful, whimsical nature of the music video, characteristic of not just the album but Styles himself. And they loved it.

His playfulness was accentuated by his colorful, stylish outfits in the music video. Fans especially loved his teal suit and yellow hat.

An overriding sentiment was that everyone needs to take a moment to just soak it in: Harry, his smile, his clothes, the cinematography.

As usual, fans fell head-over-heels in love with the heartthrob all over again.

If Twitter is any judge, Harry Styles single-handedly saved 2020.