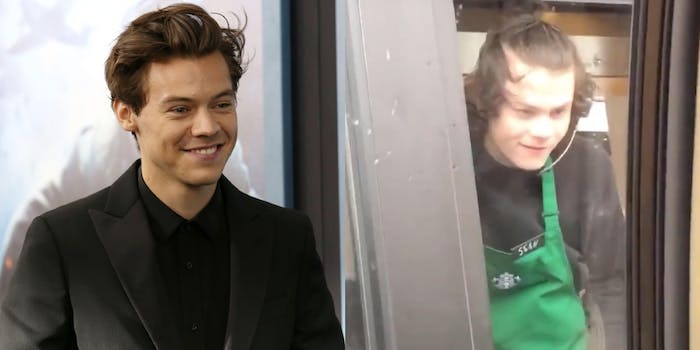 'Imagine being so attractive that strangers on the internet are going to the extent just to find your social media.'

Harry Styles has a twin, and he works at Starbucks.

The employee was discovered by a car full of teens, who shared the experience via TikTok. There, the video has racked up more than 262,000 likes and nearly 2,000 comments from stunned fans. The video prompted the internet to briefly come together, joined in its search for the Styles lookalike.

The short video shows the lookalike, whose name is Sean according to his name tag, simply performing his job. The teens in the car, obviously blown away by his resemblance to Styles, can hardly contain themselves in the video. “Are you Harry Styles,” one of them asks. Just after, the driver informs Sean that he resembles the 25-year-old musician, to which Sean simply replies “thanks.”

User @fridasakaj posted the video to TikTok, and in no time it was picked up by users all over the web. After Twitter user @90lwts shared it—earning the post nearly 11,000 likes and 1,500 retweets—the hunt for Sean, Harry’s long-lost twin, began in earnest. People from all over flocked to the post, searching for the Starbucks in the video.

One of the teens in the video, Colin Cardwell, even responded to @90lwts Twitter post and was quickly pounced on by thirsty users questioning after the Starbucks location. He did not share the location.

WHERE WAS THE STARBUCKS

A wave of people flooded the post, hunting for Sean and his Starbucks. When many of them realized they may never meet Harry’s lookalike in person, they instead began hunting for his online profiles.

The Twitter user who shared the video did, ultimately, manage to track down Sean’s online presence. They did not share it with the other eager Styles fans. “FOUND MANS @ FINALLY LMAO,” they wrote.

Despite the overwhelming consensus that Sean is cute as all get-out, not everyone thinks he looks like Styles. Several other comparisons were drawn, but the majority of people agreed that if he doesn’t look like Styles, he definitely looks like Dylan O’Brien from the Maze Runner films.

If Harry Styles and Dylan O'Brien had a child, that's how he would look like

Many people are still hunting for Sean’s online profiles, but at least a few have managed to track him down. Whether or not he’s ready for it, chances are good that this Starbucks employee’s follower count is about to skyrocket.