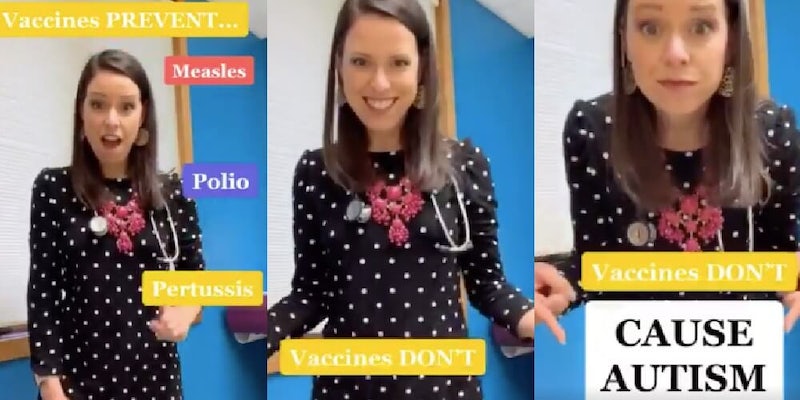 People are telling the doctor who studied for 24 years that she needs to get educated.

An Ohio pediatrician’s attempt at making an informative video has landed her in hot water online.

The video, which was shared first on TikTok and then on Twitter, features pediatrician Nicole Baldwin dancing and gesturing to the song “Cupid Shuffle,” while text on screen reads, “Vaccines prevent: measles, polio, pertussis, Hepatitis, Influenza, HPV, Meningitis, Mumps… Vaccines DON’T: cause Autism.”

Tried my hand at #Tiktok – this one struck a nerve. #VaccinateYourKids #VaccinesWork #somedocs pic.twitter.com/SoFfKsf4Ug

Forbes reports that the video’s ending statement about vaccines not causing Autism is the same statement that the Centers for Disease Control makes on its website concerning vaccination safety. Opponents of mandatory vaccination, commonly referred to as “anti-vaxxers,” have flooded the tweet with replies suggesting Baldwin is a corrupt doctor and that she shouldn’t be “imposing her views” on her patients.

“Vaccines destroy every ones life, one day you will answer to a higher power for being willfully ignorant and advocating on the wrong side of history,” Twitter user @873G5 wrote.

Vaccines destroy every ones life, one day you will answer to a higher power for being willfully ignorant and advocating on the wrong side of history.

According to the same report from Forbes, false claims regarding Baldwin’s treatment of patients, such as one accusing her of prescribing Risperdal (an antipsychotic) to Autistic children, have been created to sow doubt in her credibility as a health care professional.

Baldwin hasn’t responded to many of the replies to her tweet, but she has pointed out the obvious to a few users who insist that she educate herself.

In addition to claims intended to bring Baldwin’s credibility into question, the doctor has been the target of death threats, Forbes reports. In a post on Facebook, Baldwin writes that she has received fraudulent reviews on sites such as Google and Yelp, which are harassing her staff and “threatening her practice.”