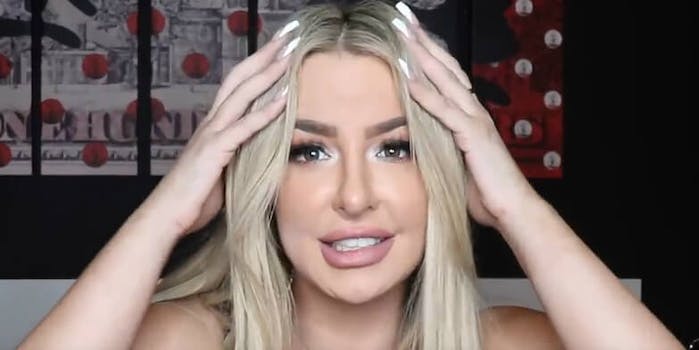 YouTuber Tana Mongeau‘s tweet on Wednesday seems to suggest she was banned from TikTok for not wearing enough clothing.

“Hi @tiktok_us i’m banned! it won’t let me post pls help i’ll put ALL of my clothes on!” she pleaded with the platform.

hi @tiktok_us i’m banned ! it won’t let me post pls help i’ll put ALL of my clothes on!

Her tweet suggests that her ban was due to violating one of the application’s community guidelines against nudity.

According to Dexerto, Mongeau also spoke about the ban in a video posted to her Instagram Story on Jan. 10.

“I’m still banned from TikTok,” she said in the video, per Dexerto. “It won’t let me post, and I’m so—I’m honestly really upset about it, like in real life. Like… what do I do? I’ll be good. I’ll leave my shirt on. I promise. No more bongs.”

Some fans on Twitter jokingly responded by saying the ban was inevitable due to her usual attire.

“Tana even if you put all your clothes on I’m sure we’d still see a nip no hate tho free the nips we like nips,” Twitter user jnjsdinkfamBri wrote.

Others shared her pain and expressed frustration over their own bans.

“I think we’re all banned,” Twitter @aimshylaoliver user wrote, along with a screenshot of their permanent ban notice.

Many shared their confusion over the ambiguity of how the rules are reinforced.

“Omg me too sis!” Twitter user @partiwzanardi wrote. Partiwzanardi also shared a YouTube video detailing their experience determining what is appropriate and in-line with the regulation standards.

Omg me too sis ! https://t.co/iqWy3axctA

Other Twitter users shared alternate reasons for why one may be banned from TikTok.

TikTok takes seriously what kind of content is shared and continues to make updates to its policies and community guidelines.  TikTok states the platform “is not the place for graphic, violent, shocking, or sensational content. If you wouldn’t show this content to your parents or children, please don’t post it here.”

For some users, the guidelines are just not clear enough. Where is the proverbial “red line” drawn? Only when slapped with a ban, is it made clear that they have gone too far.