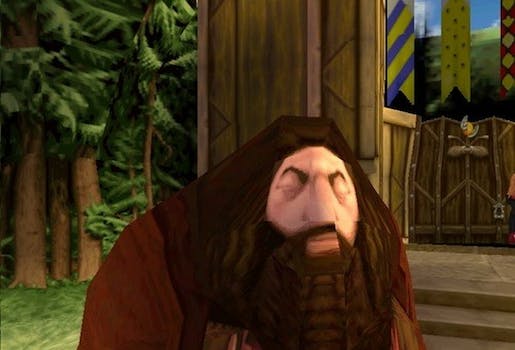 For those who grew up absolutely obsessed with Harry Potter, there were probably a few constants in your life: Collecting the books at every school book fair, tasting every disgusting variety of Bertie Bott’s Every Flavor Beans, and nerding out about Harry Potter video game adaptations.

Ah, yes, Harry Potter and the Sorcerer’s Stone. Electronic Arts released this video game tie-in on the original PlayStation in 2001 and diehard fans went nuts. It was our first real brush with Harry and the rest of the gang, and it let us engage in our own magical training to take on Voldemort. What wasn’t to love?

Well, as Twitter user @I_The_Remover reminds us, a lot of things.

PS1 Harry Potter was ahead of its time pic.twitter.com/7nnTXMMH1O

The tweet is currently making the rounds among shocked Harry Potter PS1 fans who seem to have forgotten just how advanced the game’s graphics were. It is, in a word, abhorrent. It makes you wonder how the game ever got past QA testers and out onto store shelves with graphics as heinous as these.

Maybe game creators assumed HP fans were too young at the time to notice? But these bizarre, disfigured faces look like piles of clay stretched over the bones of the Harry Potter cast. Let’s be real. This is the most pitiful excuse for game graphics we’ve seen in quite a long time. Sure, it’s 17 years old, but that isn’t exactly an excuse.

Harry potter on the ps1 is a mood pic.twitter.com/5kdQli8Kap

Let’s think about some other games that also released in 2001. Let’s see: Halo, Silent Hill 2, Max Payne…the list goes on. Although other games at the time sported what would now be considered rudimentary graphics, none were as egregiously bad as Harry Potter.

Why? Because they’re a BIG MOOD, of course.

It looks like someone drew Malfoy onto a pitta bread

Just look at Hagrid, arguably the worst of the bunch. Is he OK? How are you going to tell Harry “yer a wizard” if you don’t open your eyes and look at him? Are your eyes…sewn shut?

The next time you have the immediate urge to play a Harry Potter video game, you might want to opt for a newer title, like the recent mobile game Harry Potter: Hogwarts Mystery. Because this? This is borderline criminal, right here.

Electronic Arts, what were you thinking?