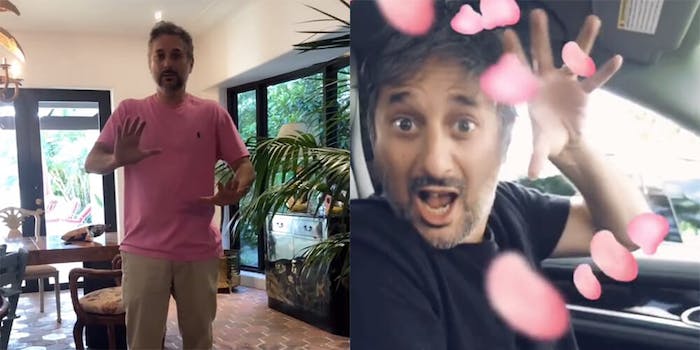 It appears that filmmaker Harmony Korine, director of cult films such as Spring Breakers and The Beach Bum, has had a TikTok this entire time. An account, with two videos with the earliest dating back to Oct. 31, 2018, has been discovered under the name “Harmonykorine.”

The account in question features only two videos but given the fact that in said videos Korine is seen directly interacting with filters only available through TikTok, it quickly becomes clear that they were filmed specifically for the platform. Additionally in one of the videos, Korine can be seen approximating his attempt at the ‘whoa’ dance by moving his arms and belting out a sincere “whoo!” The ‘whoa’ was popularized heavily through TikTok.

Although the account bears Korine’s name, the actual username remains in the inconspicuous default style when you first make a TikTok account. The account’s profile picture is an extreme close-up of Korine’s face and the username is @user221957207.

Comments on the two TikToks include “make another movie, old man,” “BRO YOU’VE BEEN ON HERE ALL THIS TIME AND NO ONE NOTICED,” and “Gummo 2 when?”

The possibility remains that the account could actually be operated by one of Korine’s children or another family member because in both videos Korine is not the person operating the camera. Korine did not immediately reply to request for comment to confirm the account’s ownership.

Korine’s latest film, The Beach Bum was a slight departure from his extremely DIY style of filmmaking but remained true to the theming of hedonism present in his earlier work. Given the guerilla nature of Korine’s films like Trash Humpers and Gummo, TikTok may actually be a viable platform for him. As of right now, however, these two small clips are all we have from Korine on the platform.