Here's what I learned at London's Nine Worlds and Worldcon conventions.

Worldcon is in its 72nd year, a huge old dinosaur (or perhaps an aging dragon) of science-fiction fandom. This year more than 10,000 people paid for memberships, which included entrance to the annual Hugo Awards. The official guests of honor were revered science-fiction and fantasy authors, editors, and illustrators, all of whom were in their 60s and 70s.

Nine Worlds was smaller, younger, and catered to a more varied crowd including comics, TV, and fanfic followers. But since both conventions took place in London, there was a lot of overlap among the two sets of attendees.

Worldcon’s appeal is partly due to its prestigious guests and partly due to its heritage as a fannish institution. Plenty of the older members have been going for decades, in some cases for literally half a century. The problem is that this core demographic can seem very out of touch to younger fans, an issue that the community has been struggling with for several years.

While the convention organizers went out of their way to invite a diverse range of panelists this year, many of the Worldcon old-timers did not seem comfortable with this development. In most of the panels I attended, the generation divide in the audience was palpable. Younger fans would regularly cringe as Worldcon veterans stood up to make some kind of mildly offensive or irrelevant comment—or to steamroll young female panelists when they tried to talk.

Robert Silverberg reminiscing about Loncon 1 and 2 at #LonCon3 yesterday pic.twitter.com/4Up8dJGWNF

And then, of course, there were the age-old rivalries. Fandom has always loved its gossip and feuds, but some of the dividing lines at Worldcon seemed more suited to a convention in the 1970s.

The idea of a rivalry between media and book fandom seems borderline nonsensical to anyone who grew up with Sherlock, Harry Potter, and comic book adaptations, but Worldcon is one of the last true holdouts of the idea that only hard sci-fi/fantasy literature is the “real” thing. At one point, I heard multiple Hugo and Nebula award-winning author Robert Silverberg jokingly refer to new media and comic cons as “those other moron conventions.”

No wonder the Worldcon first-timers spent so much time rolling their eyes and live-tweeting their embarrassment during panels. They’d been relegated to the role of rebellious teenagers chattering at the back of a classroom.

The program organizers were obviously aware of the issues presented by Worldcon’s aging population. However, during discussions about how to attract a new generation the convention, I’d hear people talking about how the Internet is isolating and incomprehensible—or how it lacked the personal touch of fanzine mailing lists. One audience member asked what had happened to slash fanfic. Why didn’t he see it in fanzines any more? What made it die out? Apparently he was unaware of the vast quantity of slashfic constantly being posted online, including in older fandoms like Star Trek, which long ago made the jump from print to Internet.

“Worldcon is like a family reunion,” said longtime convention-goer and fanzine writer Curt Phillips, at a panel about the history of Worldcon. After a few days, I could only agree. It was indeed like being at a family reunion, in that it felt like you were spending your time with elderly relatives. You might want to talk to them and listen to their stories, but you’ll have to tolerate some offensive and outdated opinions along the way. 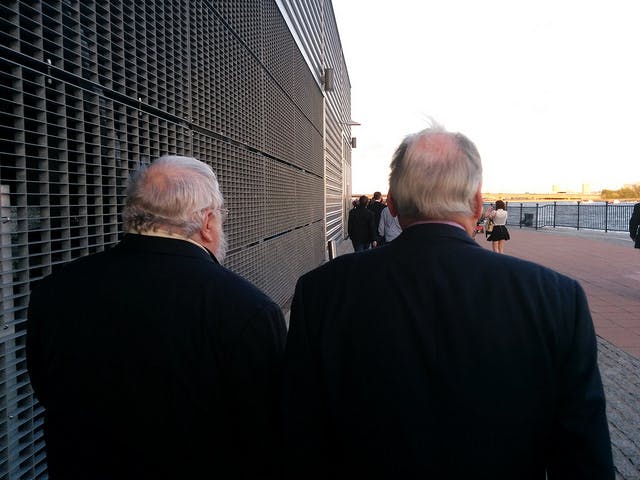 While the panels themselves were full of fresh and progressive fandom voices, audience responses ranged from clueless to downright unpleasant, with an aura of entitlement. I was stunned when one man started a conversation purely to make fun of me for attending on a press pass—and then tried to run me through some antique variation of the Fake Geek Girl test.

Other people’s experiences were more explicitly exclusionary. In a blog post titled “Conventions, hierarchies and forced diversity,” academic and Worldcon panelist Bertha Chin wrote about how Worldcon’s newfound desire for diversity meant she had to repeatedly reject being added to race-related panels that had nothing to do with her areas of expertise. Then once she arrived, she saw the same kind of things I’d been seeing: Young female panelists being shouted down by old men in the audience, and Worldcon veterans expressing tone-deaf attitudes toward queer issues and people of color.

The programming at Worldcon was varied enough to cater to everything from Tumblr-based Night Vale fans to discussions of mid-20th century sci-fi/fantasy classics. But in the end, the core demographic remained the same: older fans who came up through pre-Internet fandom and often considered themselves superior to the newcomers. Most of the younger people seemed to arrive on Saturday and Sunday on day passes, and a common refrain was either that they preferred Nine Worlds the previous weekend, or that they wished they’d gone to Nine Worlds instead.

So, what made Nine Worlds so much more popular among younger fans? Obviously, it couldn’t offer anything as impressive as a Worldcon sighting of George R. R. Martin, or an opportunity to rub shoulders with the Hugo Award finalists. The main thing Nine Worlds had in its favor was rather more difficult to pin down: the tone and mood of its crowd.

At Nine Worlds, you wouldn’t feel belittled for not understanding an ancient in-joke, or for being a fan of anime or superhero comics, or for speaking out against racist subtext in a genre favorite like Firefly or Doctor Who. However, this wasn’t one of the dreaded media conventions where people pay to line up for hours for celebrity autographs and marketing freebies. Like Worldcon, Nine Worlds focused on panel discussions about fan culture and books, rather than having the commercial nature of something like San Diego Comic-Con.

At heart, there was plenty of overlap between the fannish interests on display at Nine Worlds and Worldcon. The most important difference was simply the way people behaved.

Nine Worlds went out of its way to be as accepting and safe as humanly possible, distributing color-coded lapel clips to indicate your level of comfort when interacting with strangers. A red clip meant “leave me alone.” A green clip, and you’d soon be making friends. You could also wear a badge with your preferred gender pronouns, and there were jugs of ice water in all the hallways in case anyone got dehydrated.

In case you weren’t there, this is what you missed at #nineworlds… dancing with aliens! @London_Geekfest pic.twitter.com/xcB0jeubKU

In the fast-moving and crowded environment of a fan convention, it was little touches like this that made everything feel more comfortable and easy to navigate, particularly for people who hadn’t been to a con before. Nine Worlds also made sure their code of conduct was displayed clearly on their website, which is more than you can say for SDCC. After an ongoing series of harassment scandals at various other conventions, this was very reassuring. It sounds hokey, but the end result was that Nine Worlds had the kind of warm, inclusive atmosphere that most attendees had never experienced at other conventions.

To a certain extent, Worldcon’s size is a barrier to this kind of inclusivity. A 10,000 person behemoth may not be able to implement gender pronoun badges or a color-coded social interaction system, not just because of the sheer volume of people, but because half of them would dismiss it as politically correct nonsense. Conversely, I spoke to several Tumblr-generation Worldcon attendees who either gave up after a day or so or began to view the core Worldcon community with a kind of anthropological fascination. How was it even possible to be this oblivious of the changing face of fandom?

In order to truly enjoy Worldcon, you had to be one of three things: someone with a ton of old friends at the convention, a serious sci-fi/fantasy literature fan who wanted to get some books signed and sit in on academic panels, or a writer who wanted to network with other people in the industry. Being a Baby Boomer would also help a lot.

If you were a newcomer attending Worldcon by yourself, or if you were used to the kind of fandom that focuses on things like racebent fanart, slash fanfic, and intelligent pop-culture critique, then you weren’t going to have much fun. Which is pretty sad, because these two interest groups are not separate monoliths. Plenty of die-hard Supernatural and Avengers fans also read Tolkien and Neal Stephenson, and plenty of academic sci-fi/fantasy fans also like to dress up as anime characters. Unfortunately, while Nine Worlds seemed to understand this, Worldcon—or the people who regularly attend Worldcon—did not.

For many, the Worldcon experience was just not worth it if your comments were constantly at risk of being shouted down old men. Either some drastic changes will have to be made, or those younger fans won’t come back at all.

When writing about the generation gap at Worldcon 2013, author Madeline Ashby phrased this rather more brutally: “It’s okay, because someday they’ll all be dead.”

Sometime in the next couple of years, the balance at Worldcon will tip, and the overall culture of the convention will reluctantly follow its younger members into the 21st century. But with most fans now communicating online and consuming a far wider range of media than you see on the Hugo writing shortlists, Worldcon is currently at least a decade behind the zeitgeist.

The people who traveled Nine Worlds were just as geeky and thoughtful as those who went to Worldcon, but they had other priorities. They were informed about issues of discrimination in fandom and were capable of having public discussions about racism and rape culture without having to field noisy interruptions from their peers. They were aware of the strengths and pitfalls of social media and had intelligent opinions on the way media corporations exploit and engage with fandom. Essentially, they were more willing to discuss the darker aspects of fan culture, while also visibly having a lot more fun than the crowd at Worldcon.

Worldcon is for people who, through a lifelong love of Doctor Who and Asimov and Philip K. Dick, are obsessed with visions of the future. But that future is a fictional one. The type of fans one met at Nine Worlds were far from infallible, but they understood that in order to participate in fandom, you should be working to improve that experience for other people. In other words, they were interested in the future of the real world, rather than celebrating some nostalgic image of the past.