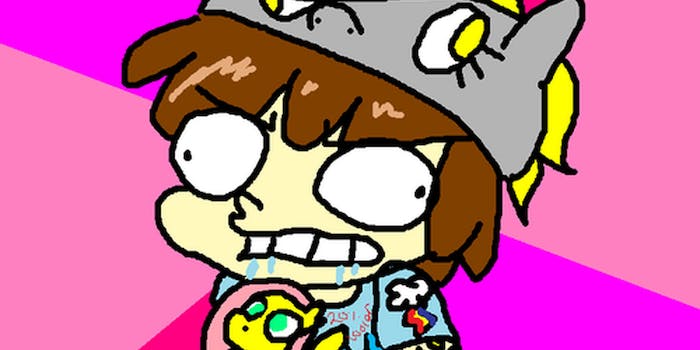 Attendees of Everfree Northwest, a Seattle-based My Little Pony: Friendship is Magic convention, took to Tumblr to air their grievances about fellow con-goers' atrocious behavior.

My Little Pony: Friendship is Magic is a show that stresses the importance of treating everyone with love and tolerance. However, many bronies—adult fans of the show—have come forward to say they felt neither loved nor tolerated at a national brony gathering this weekend.

On Saturday and Sunday, hundreds of bronies attended Everfree Northwest, a Seattle convention for fans. Mere days after the event ended, stories are trickling onto Tumblr and Reddit about less than positive experiences involving sexism, racial slurs, and even assault.

At least two Tumblr blogs, Sane My Little Pony Fan and Truth about Everfree, are documenting fans’ stories of harassment, including one where a brony choked another fan after misunderstanding a joke between friends.

It was fuel to the fire already sparked by purpletinker on DeviantArt, BronyCon’s transgender founder and former Everfree supporter, who said she no longer promotes the convention after she discovered some of the organizers endorsed participants in online bullying in which some referred to her as a “tranny.”

Another attendee, mjolkk, said she also experienced a racist and sexist environment while at Everfree.

“I don’t have a problem with the show or a majority of its fans, but this convention was ruined for me because not only did this kind of behavior run rampant, but the staff allowed it to do so.

When I complained to a staffer about the rape jokes during one of the panels, they just shrugged and told me to deal with it, as it’s “part of the experience.” When I told someone in [convention operations] that people were yelling some very inappropriate and sexual things at Claire Corlett [an underage voice actress for Friendship is Magic], they just told me that they couldn’t do anything about it because there were too many people there to find the people responsible.

Are you kidding me? HILARIOUS RAPE is part of the pony experience? And I’m supposed to be okay with that? I’m supposed to be okay that an event that has gone to great lengths promoting itself as family friendly allows their underage guests of honors to be subjected to molestation heckles? You want me to be nice to the people who look at a piece of humanized Twilight Sparkle fanart and call her a nigger because the artist has drawn her as black?”

Her post, which has 2,000 reblogs, has elicited dozens of explicit hate messages.

Unfortunately, verbal and physical harassment are not uncommon at fan conventions, and My Little Pony is by no means the only fandom to face bad publicity for the actions of the few. On Reddit’s r/mylittlepony, a security staff member said he had a far different experience.

“I did not see any evidence of this type of rampant rudeness,” ArcaneAmoeba wrote. “For the most part, the crowd was very respectful, and, in my experience, anyone who was doing anything like what this post mentions was dealt with properly … Everyone should keep in mind that we are not omnipotent, and as such some of this stuff will unavoidably fall through the cracks, especially with a fandom that is enthusiastic and varied as this one is. I can say with 100% certainty, however, that this post is exaggerating or fabricating any problems with the con.”

However, Redditors agreed that it is an unfortunate image problem for a fandom about “love and tolerance” to have.

“I don’t think this is a problem with the fandom specifically as it’s a problem in general,” musubk wrote. “It seems extra-out of place when it comes up in pony context, and it’d be nice if we were better than that.”

Correction: A previous version of this story referred to purpletinker as an Everfree volunteer. She is actually BronyCon’s founder and an early Everfree promoter.

Update: Read the Daily Dot’s followup to this report, including responses from convention staff and the community.