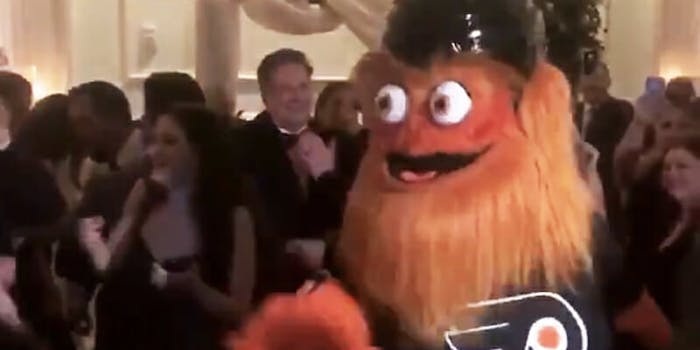 Gritty showed up at this fan’s wedding

It’s kind of hard to believe that it’s only been two months since Gritty, the new mascot of the Philadelphia Flyers has come into our lives—because our lives will never be the same again. Initially ridiculed by the very city he represents (and the rest of the world) the mascot strangely yet quickly pivoted to become a viral sensation as well as a symbol of the antifa movement.

If Gritty has become universally beloved by people across the country, you can only imagine how popular he is in Philadelphia. He’s become a bona fide A-list local celebrity, eliciting reactions similar to those at the height of Beatlemania.

So when the seven-foot-tall mascot unexpectedly showed up at a wedding in the Northern Liberties neighborhood of Philadelphia on Friday, it’s safe to say people lost their dang minds. A few guests captured the chaotic scene when Gritty descended on the dance floor and posted photos and video to Twitter.

“Gritty just showed up at this very Philly wedding I am at and I have never been more starstruck in my life,” tweeted Brooklynite Mary Wagner.

GRITTY JUST SHOWED UP AT THIS VERY PHILLY WEDDING I AM AT AND I HAVE NEVER BEEN MORE STARSTRUCK IN MY LIFE pic.twitter.com/BYCZSC0J2C

And Gritty was even gracious enough to pose for photos with his adoring public.

THIS IS THE MOST IMPORTANT THING THAT HAS EVER HAPPENED TO ME pic.twitter.com/9NriplJgoP

Although it was initially assumed that Gritty “crashed” the wedding, as it turns out it was a surprise organized by the father of the bride.

“The bride, Heather Grossmuller and her father, Ray, are big Flyers fans,” her cousin Stephanie later told CBS Philly. Stephanie was lucky enough to have a front-row seat the bridesmaids’ table when he showed up.

“Once Gritty came onto, you know everywhere, Heather was instantly really into him,” she explained. “They were always joking it would be cool if he would come to the wedding.” The mascot apparently stayed for about an hour and snapped photos with guests when he wasn’t on the dance floor.

If rain on a couple’s wedding day is supposed to be good luck, it seems safe to say Gritty probably just slapped a lifetime warranty on that union. Mazel tov!