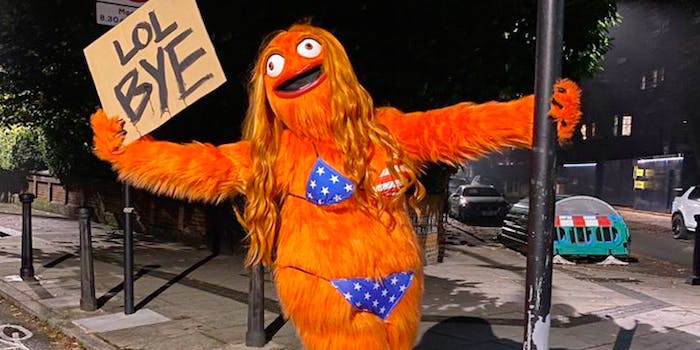 A conversation with Grittney, the ‘female Gritty’ who became a viral sensation

All eyes were on Philadelphia this past weekend when votes being tallied at the Pennsylvania Convention Center ultimately decided that Joe Biden would become the next president of the United States. The excitement was palatable. In the city, impromptu dance parties broke out in the street, and Philly memes quickly began circulating online. However, through it all, one unlikely figure rose triumphantly: Grittney, a female counterpart to the Philadelphia Flyers beloved mascot Gritty—hailing not from the city of brotherly love but all the way from across the ocean.

Riot Rogers, the 27-year-old London-based aspiring prop maker and costume design student, as well as the genius behind Grittney, was kind enough to speak with the Daily Dot about her creation. Interestingly enough, as both an avid hockey fan of the Flyers, in particular, and seasoned cosplayer, Rogers seems to have been uniquely suited to bring Grittney to life.

Yet, even then, Rogers was blown away at the reception that Grittney has gotten since tweeting the photos on Friday evening.

“I was expecting my circle of friends—like I have my hockey Twitter friends—because obviously I don’t have any in England. And then I have the people who know me as a creator, like a costume maker and a prop maker,” Rogers told us. “I expected like maybe I’ll get a hundred, maybe 150 likes because of my inner circle.”

Instead, Rogers’ photos of Grittney saying “bye” to President Donald Trump after Biden was announced the winner spread across Twitter like wildfire, garnering thousands of likes and retweets.

“I didn’t get any sleep that night because every time I went to refresh my phone it would freeze, and there would be all these notifications, and it took me like 10 minutes to scroll back to where the last notification was,” she continued.

Rogers said that when she first unveiled Grittney, it had been with a proper photoshoot on Valentine’s Day.

“My uni was very supportive of this atrocity that I had made,” she quipped. “Like a whole room to shoot in, they lent us 10 grand worth of camera equipment and lighting, and we did like a proper shoot to do the Valentine’s photos and it took like two or three hours.”

The photos that ended going viral, however, were the result of 10 minutes out in the street with a smartphone camera. But they captured the joy and relief that many Americans, as well as people in other countries, felt after the U.S. presential election results were called. Rogers even tweeted a Grittney video at Trump that showed Grittney holding a sign that read, “you fucked around” on one side and “you found out” on the other.

As to how Rogers first became enamored with Gritty, she says her fascination developed very much as the natural course as native Philadephians—and then by proxy, the rest of the world.

“When they first announced him, I was not a big fan because he scared the shit out of me, and I was like, there is something very wrong about him. If you’ve looked up [the British television character] Mr. Blobby, I was having PTSD from my childhood. I’m like, no no no no, I don’t want this thing.”

“But it was the way Philly was immediately like, ‘He’s hideous!’ ‘But I love him!’ ‘How dare you talk bad about our ugly, ugly, mascot,'” she added. “Then the second he threatened to kill the Penguins mascot in his sleep, and then the second other people were like, ‘Your mascot is stupid,’ Like, ‘How dare you shit-talk our ugly mascot, only I can do that. Just for that, he’s now my hero.'”

Rogers is also quite fittingly a fan of the city in general. She visited Philadelphia to attend a Flyers game earlier this year, shortly before the coronavirus pandemic broke out, and she plans on returning when it’s once again safe to do so.

The tragic origin story of Grittney

“I’m in an awful place right now and I want to make everyone else suffer. I’m going to make a nightmare in a G-string, and you’re all going to deal with this.”

Like most great art—though, Rogers is quick to say that it wasn’t her intent or motivation—Grittney was the result of deep pain in her personal life. Not only had she just experienced the loss of her two pet rats and suffered a concussion, but after flying out to visit her boyfriend of three years in Texas, he broke up with her before she got back on her flight home.

“I did it as a joke, but she was sort of a stress grief project,” Rogers admits. “On the flight back, I sat and I really thought about what I was gonna do with Grittney, because it was a nine-hour flight. I couldn’t look at screens at all, it made me want to throw up. I get really horrible migraines. And I was like, I can’t watch movies, I can barely listen to music because that makes me feel sick, so I was like, great, I’m just trapped with a load of grief right now.”

Out of the desire to work on a project that was going to take a lot of time, and thus take her mind off her breakup, Grittney was born.

“Gritty people talk about how he wasn’t so much as like, made, but I don’t even really believe that there’s a guy inside of that. I think that thing is like, A Thing,” she explains. “He’s supposed to be like the manifestation of Philly, and I wanted something just really creative that I could pour my focus into.”

“I thought, ‘I’m in an awful place right now and I want to make everyone else suffer. I’m going to make a nightmare in a G-string, and you’re all going to deal with this,'” she said.

The literal devil was in the details

“Her pupils are made out of bone, which wasn’t on purpose, and she’s definitely cursed because of it.”

Rogers also provided some insight as to her creative process when designing and building the Grittney costume, which is made primarily out of materials such as upholstery foam, gym mats, and scrap canvas.

“She’s got these long acrylic toenails, her feet have some really awful detailing on them. There’s actually a pair of flip-flops on the inside that are secretly cursed,” she revealed, before retrieving one of Grittney’s actual feet to show us on the Zoom call. “This is dirt,” she explains, pointing, “but she has like individual toes and everything. We were doing a glamour shot where she was like, naked, so she can’t have shoes at the bottom of her feet, she’s got to have like realistic feet.”

No detail was spared, including the 300 feet of synthetic hair extensions used for Grittney’s lovely locks and three-inch-long eyelashes. “She’s got three colors in her hair, she’s got like a dark orange—I wanted her to have like pretty highlights.”

Another bizarre detail? Grittney’s googly eyes are, quite horrifyingly, made out of bone.

“Her pupils are made out of bone, which wasn’t on purpose, and she’s definitely cursed because of it,” Rogers said. “I found some buttons that were the right size, so I was like OK these will work fine, but then when I was sanding them I was like, ‘Why does this smell like burnt hair,’ and I went and did a test, and I was like, ‘Ohhhh, these are like, old school bone buttons.'”

“And her eyes rattle when she moves, everyone in my workshop hates it,” she giddily added. “They love her, but they also just hate her.”

Unfortunately, the touches that Rogers never got around to adding to the final creation were a tramp stamp and honking boobs. “I don’t know if I’m more happy or sad that I couldn’t put those in,” she reveals. “I haven’t decided yet if I stopped at the right point. I want her to be like, a little trashy because I feel that Gritty is trashy, but I love unapologetically trashy things.”

“I just want Gritty to acknowledge me.”

Contrary to popular belief, as Rogers tells us, Grittney was intended to be neither a romantic interest for Gritty, nor blood relation. Instead, like the rest of us, Grittney is simply a stan.

“I’ve seen people calling her Gritty’s Jersey girlfriend. I didn’t see her as a relative. In the law and history I made up for her in my head, she was like unearthed, the same way he was—like, they dig her out of the foundations of a beauty salon,” Rogers says. “And that’s why she’s got way nicer hair, like she’s had her pelt blow-dried. In my head, I wanted her to be like a fangirl of Gritty. Like she saw Gritty one day and was like, ‘Oh my god, he’s so bae, he’s everything I want in a man, he’s got the perfect body, look at his beautiful face—just in love with him.'”

“That was my goal. I just want Gritty to acknowledge me. That’s all I wanted, and if we keep joking and be like, she’s all over the news now. This all could have been prevented if he would just give her a wink,” she concedes. “This could all be over, but we’re escalating. Like, I joke about the cease and desist from them, because if I got a cease and desist, I would frame it. I’d be like, this is great, can you sign it? Please?”