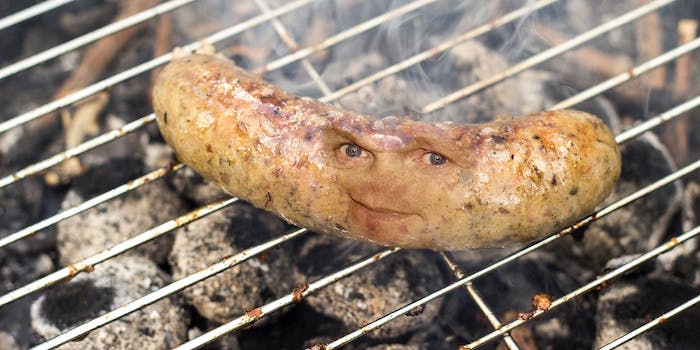 Once upon a time, way back in 2015, the sausage rap was the hottest thing on Vine. That phenomenon, like everything viral, eventually faded, but sausage itself lived to meme another day—as “sosig.”

What’s so funny about a noseless Photoshop of celebrity chef Gordon Ramsay combined with this particular misspelling of a popular meat? Nothing, really. Most of the meme’s practitioners would readily admit that these are shitposts—garbage designed to clog up Facebook feeds and annoy as much as amuse. And, at least on that score, they are pretty funny.

This image macro genre, according to Know Your Meme, has only been around since July 22, but the “sosig” spelling likely originates from this previously viral photo of a drawing by a 100-year-old girl named Sarah.

Yes, we’re living through an era in which a meme may only exist so that Weird Facebook kids have something to rally against. Sosig and its many spinoffs—all you need is some crappy visual editing and and worse phonetics—are nothing if not deliberately lazy attempts at anti-humor.

However long this lasts, we can only hope that the related trend of labeling Dachshunds “sosig,” which predates the Ramsay movement, continues.

For now, however, it seems there’s no escaping the sosigfest, so you might as well join the party. Not like you’ve got something better to do.