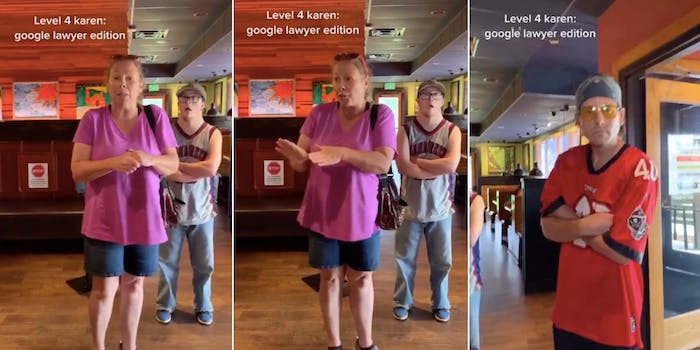 'I am not required to follow those orders and rules. It is your responsibility to prove that it applies to me.'

Law school is difficult, expensive, and time-consuming, but anybody can become a Google Lawyer for free.

Just ask “Google Lawyer Karen,” the militant anti-masker whose restaurant rant originally went viral on TikTok in July when @pizzaqueeniee uploaded it and resurfaced on the r/PublicFreakout subreddit this week.

“This is a public establishment,” Google Lawyer Karen insisted. “Your rights are all being violated for making you wear a mask.”

Undaunted by logic, reasoning, decorum, and an employee who said she would be considered trespassing if she refused to wear a mask, Google Lawyer Karen continued ranting about the nature of the property.

“It’s public property because you registered to the secretary of state,” she said. “You are a public service. You are a public business. You are required to follow the rules and orders of the state.”

Then, in a declaration that applied to millions of entitled Americans in 2020, Google Lawyer Karen said, “I am not required to follow those orders and rules. It is your responsibility to prove that it applies to me.”

@pizzaqueeniee’s video is mercifully short, and it does not show how the Google Lawyer Karen v. Restaurant case was resolved. The man presumed to be her husband leers at the camera, donning a Tampa Bay Buccaneers jersey (of course there’s a tenuous Florida connection here), as their son watches silently, probably consumed with embarrassment.

Google Lawyer Karen’s public meltdown served as an inadvertent testament to the value of law school. The barriers to entry are steep, but if you actually learn the law, at least you’ll be less likely to publicly humiliate yourself like she did.