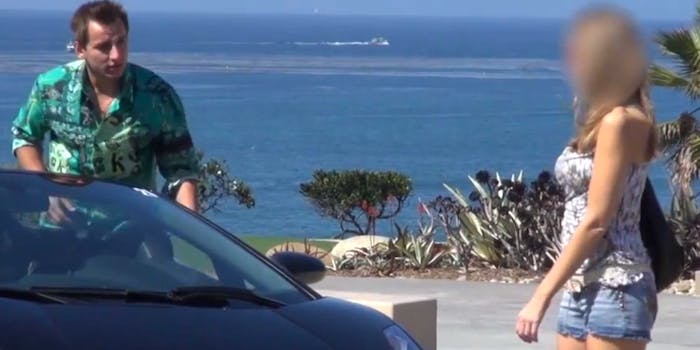 Candid camera gags walk a very fine line and often stumble over it: Does anyone really deserve to be pranked? The fellows over at YouTube channel VitalyzdTv set out to find someone who did—a shameless gold digger.

“So I went out to film how to pick up girls,” a description explains (and we shudder to think what that clip would entail), “but Roman, Dennis and I decided to do a little twist … the video speaks for itself.” In it, a man in an appalling Hawaiian shirt tries to get a passing woman’s phone number or set a dinner date. She blows off his flattery like any reasonable female might.

She then makes a fateful mistake: changing her mind when she sees that her suitor drives a sleek black Lamborghini. This, of course, serves as the set-up for the ice-cold burn that is the prank’s raison d’être, followed by a stylized exit.

Aside from the usual complaints that the incident is faked, we’re also venturing into dangerous gender-issue territory here. But if we needed proof that not all women are as materialist as this one (as a top comment argues), it’s in the fact that this wasn’t a montage—the dude was probably rebuffed by plenty who didn’t care about his apparent wealth.

Plus, given that he was approaching her based on looks alone, how exactly does he claim the moral high ground here? Is it even fair to assume this unfortunate lady was after money? Maybe she just wanted to ride in a totally cherry Lambo on a sunny day in L.A. with the top down. Even Kanye couldn’t complain about that.