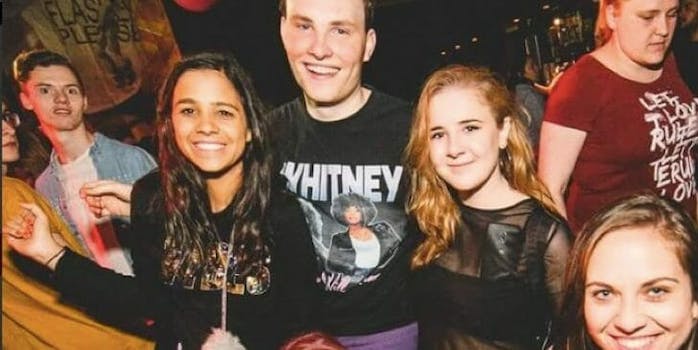 How do you explain this girl’s 6-foot-long arm?

That's quite a wingspan.

Whether it’s a dress that seems to change color or a woman who appears to be missing her legs, the internet loves its optical illusions. The latest eye-tricking photo to go viral is a shot of a group of friends at a club, where the frame is dominated by one girl’s Stretch-Armstrong-like 6-foot-long arm. Her giant wingspan is obviously an illusion of some sort, but can you see what’s really going in the photo?

Elle Bailey, who posted the photo and is the sister of the long-armed woman, explained on Twitter that her sister’s arm isn’t even visible here—she’s holding it behind her back. Part of what appears to be an arm is just the bottom of the boy’s black T-shirt, and the hand belongs to the girl on the left.

That’s pretty confusing because the girl on the left still looks like her arm is longer than normal. It’s just the way the photo is warped, though, causing the left side to stretch out. You can tell by the way the girl in yellow and the guy in the denim shirt look distorted.

By the way, that guy is all of us when we first saw this photo:

The illusion went viral Monday, starting in Bailey’s native U.K., as confused people attempted to figure out what was going on with the oversized arm. It’s not on the scale of The Dress, but it has picked up press coverage from major British papers including the Telegraph and the Daily Mail.