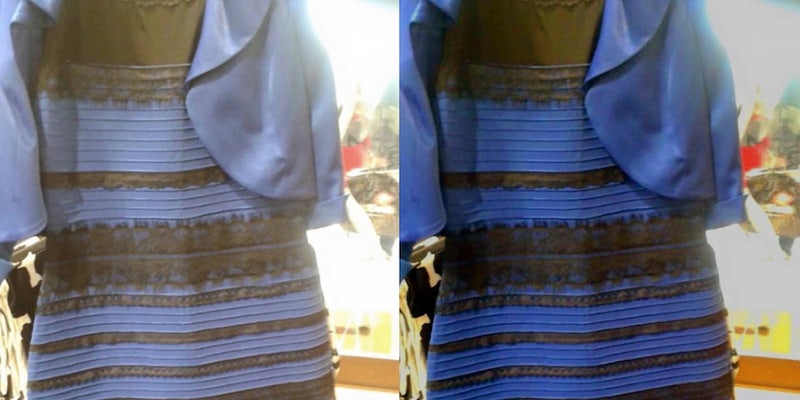 The viral tale of what color this stupid dress is

The Internet lost its collective mind Thursday over the color of a dress originally posted by a Tumblr user. 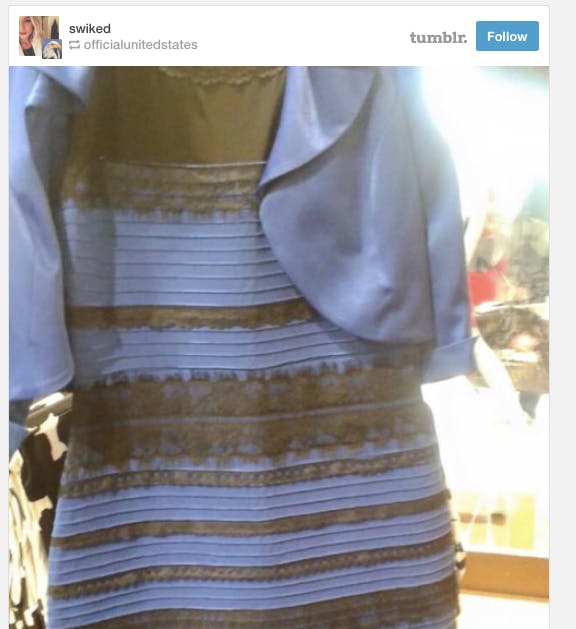 swiked:
guys please help me – is this dress white and gold, or blue and black? Me and my friends can’t agree and we are freaking the fuck out

Some users see the dress as white and gold. Others see black and blue. Some report being able to see both colors at different times, or swap the colors at will. #TheDress began trending on Twitter, along with other hashtags, and everyone started to weigh in with their their own theories—emotions, light and color influences, simply a hoax.

dress theory: the aliens are switching some of our brains so we become frustrated and begin to fight and then they'll take over

Here's my theory on the trending dress: pic.twitter.com/bJhYrROYj5

Genuinely concerned for my bf…. WTF. MAROON ISNT EVEN AN OPTION #thedress pic.twitter.com/7EymQSFZ8e

We think it’s a dress from Roman Originals, specifically this make and model, a black and blue offering that comes in other colors. Roman Originals could not be reached for comment.

For what it’s worth, here’s what Google thinks.

The dress is likely blue and black. But with doctored lighting appears convincingly white and gold.

Update 5:24am CT, Feb. 27: We got in touch with Roman, the maker of what we believe to be the dress. They confirmed the dress has never been made in white and gold before. However, that doesn’t mean your pipe dream has to die: “I can confirm that we are in contact with the suppliers to establish if we can get style 70931 manufactured in white and gold.” Hope lives.