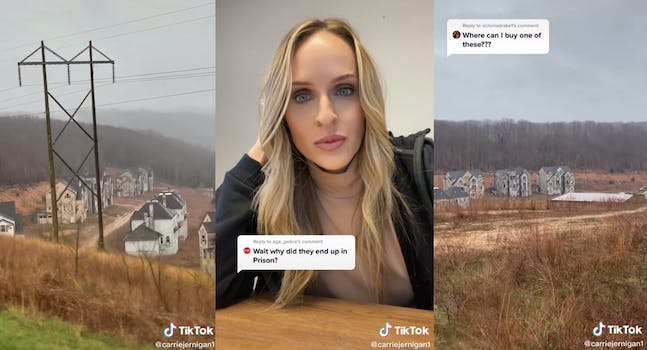 Missouri’s Indian Ridge Resort was designed to be a luxury community for wealthy homeowners. But when the 2008 financial crisis hit, construction was halted and the resort became a ghost town. Now, people are rediscovering this creepy site thanks to a viral TikTok video.

Posted by Tiktoker @carriejernigan1, the video shows dozens of abandoned mansions, looking especially spooky due to their faux-historical design. The subdivision was originally meant to look like a neighborhood of castle-style McMansions, but they quickly fell into disrepair when the resort was abandoned. Now, Indian Ridge looks like a horror movie set.

“I’ve been there and it’s one of the worst feelings I’ve ever felt,” a commenter wrote, per Yahoo.

Since being posted in the past five days, the TikTok video has more than 14 million views. Carrie Jernigan is an Arknasas-based lawyer and has dedicated subsequent TikToks to detailing Indian Ridge’s sordid history.

A 2017 drone video can give you a closer look at the abandoned buildings, most of which are half-finished and have a definite theme park vibe due to their fake historical facades. If Indian Ridge Resort had actually been completed as planned, this $1.6 billion community would have included a museum, a luxury hotel, and one of the country’s biggest water parks.

Considering how many people have now seen that viral TikTok, it’s surely only a matter of time before someone uses this idea for an actual horror movie.