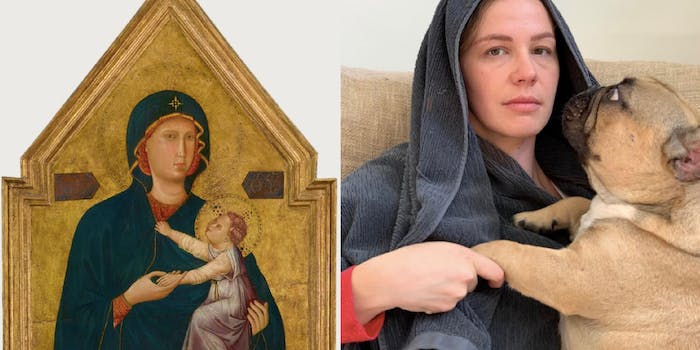 Museum challenges people to recreate art in their homes amid coronavirus

Some thought the remakes were 'blasphemous.'

A shelter-in-place order doesn’t have to mean being bored.

The Getty Museum is asking those stuck at home to recreate art from household objects and share pictures of it online. Specifically, it’s asking people to find three objects in their home and use those to recreate a famous artwork.

The Getty provided its own database for participants to find works to imitate.

From clothes to cleaning supplies and food, people are truly thinking outside the box.

Don’t have a tall staff? A field hockey club is just fine.

“The three food groups: canned tuna, cheese, and olive oil,” the Getty Twitter account wrote in the caption of a still-life featuring food from different eras.

Not everyone adhered to the three-object rule. This rendition of “Modern Rome” clocks in at 18 minimum.

But some people aren’t happy with the museum challenge renditions. In particular, this “Madonna and Child” recreation got a lot of negative attention. That’s because the child in the remake is a dog.

The cultural significance of religious imagery is what fuels most of the distaste.

“I am a supporter of yours and of all arts, but I think this comparison while seeming ironic to many, could be offensive and hurtful to the many people in Latin Catholic countries fighting the epidemic in desperation,” Twitter user @angelaM9K wrote. “No need to explain why. Thanks from Italy.”

Other entries based around religious art are being called “blasphemous.”

“You are mocking the icons,” Twitter user @Wakeupfortruth wrote. “This is blasphemous and offensive. They are not simply artworks but ‘an icon is a sacred image used in religious devotion.’ Please take these images down.”

However, for many, the museum challenge seems like it was just a way to pass some time during self-quarantine.