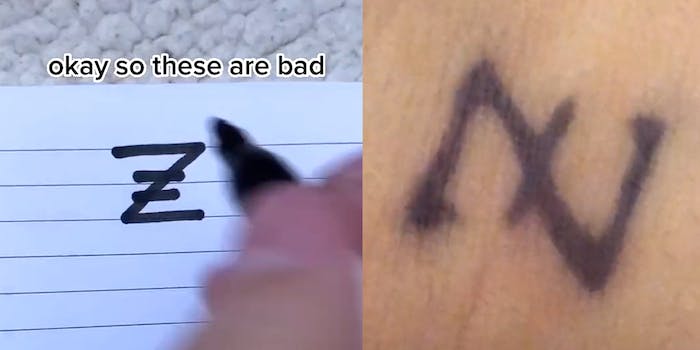 Maybe just don't get matching tattoos at all?

Does Gen Z need its own tattoo? This idea was proposed on TikTok last week and it was immediately pointed out that the design looks a lot like a Nazi symbol.

The original video, from user smoothavacado, has been made private, but the clip can be found on Twitter and TikTok duets. She suggests a “matching tattoo” as a generational “symbol of unity” and proposes a capital Z with a horizontal line through the middle.

While people initially expressed excitement over this act of generational bonding, and many TikTokers allegedly showed off their ink, it was quickly pointed out that this particular Z design has roots in white supremacist movements and that it looks a lot like the neo-Nazi symbol Wolfsangel, which was used as a “divisional insignia” in Nazi Germany, according to the Anti-Defamation League.

The hashtag #genztattoo has more than 24 million views, and is filled with people mulling over the tattoo idea as well as advocating that people not get the tattoo. There were also alternate designs for the tattoo—or potential coverups.

The original poster said over the weekend that she didn’t know about the symbol’s meaning, and that she’s been “writing my Zs like that since elementary school.” She also said she’s been getting death threats and harassment.

According to a thread from Left Coast Right Watch, she had previously directed people to her Etsy store, where she allegedly was selling merch with that design on it. She said in the apology video that she was taking that merch out of the store. In another video, she proposed some alternate ideas for tattoos, lifted from other TikTok accounts.

Many people suggested the Stussy or “surfer” S, which has been circulating for decades and is (hopefully) still a neutral symbol.