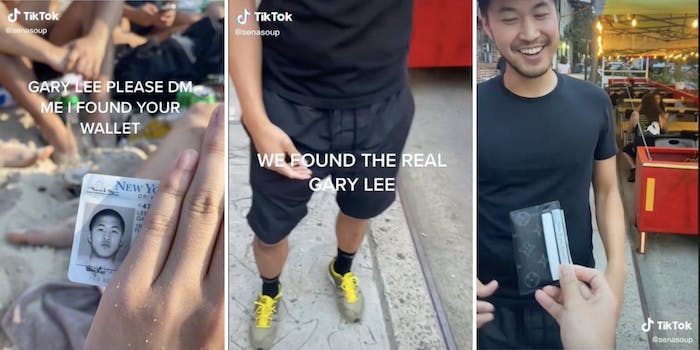 Typically, when someone loses a wallet full of cash, it’s probably best to just cancel credit cards, call it a wash, and move on with life. But every now and then, Good Samaritans can surprise us. One fortunate individual, a 33-year-old Brooklyn resident named Gary Lee, not only got his wallet back but became a TikTok meme at the same time.

It all started over the weekend when TikTik creator @senasoup happened upon the now infamous wallet during a day at the beach. (If there’s one place people tend to misplace their wallets, it’s definitely the beach.) “Gary Lee please DM me, I found your wallet,” the short clip announced.

The 22-year-old, whose full name is unknown, also flashed Lee’s driver’s license while making sure to obscure his address and private information.

Chalk it up to the cash or shiny Apple Card peeking out of the wallet, but the TikTok video quickly went viral as dozens of people began to come forward, all cheekily claiming to be the real Gary Lee. Many even created fake accounts using crudely Photoshopped profile images of Lee’s driver’s license photo—with everything from facial hair and pigtails to dog ears—representing themselves as Gary Lee’s twin brother, siblings, children, and even pets.

Finally, after the video was viewed approximately 30,000 times, a friend of Lee’s happened to see it and reached out to @senasou. After confirming his address and other information that only the wallet’s owner would have known about, a meeting was arranged in Manhattan’s East Village to hand off the goods.

The real Gary Lee also made a TikTok account under the username @therealgarylee5 for added visibility. Though, it’s practically impossible to tell him apart from the fakes, which eventually numbered into the thousands as the video was viewed millions of times.

Naturally, the meet-up was filmed for TikTok so users could witness the thrilling conclusion to the saga. Gary Lee likewise posted his own video after getting his wallet back.

“A whole bunch of us were at the beach and my friend Jimmy found the wallet on the boardwalk and told me about it,” @senasoup, later told Insider. “He wanted to make sure Gary got his wallet back and as soon as I heard that I said let’s make a TikTok.”

“My friend actually put me on notice and I couldn’t believe it,” Lee added. “It was my wallet! On TikTok!”

With any luck, Lee will take better care of his wallet from now on. Because if not, it seems like there will be no shortage of people who will happily claim it next time.

‘Did it hurt’ meme turns a pickup line into a takedown

Panera worker puts the soup on blast in viral TikTok