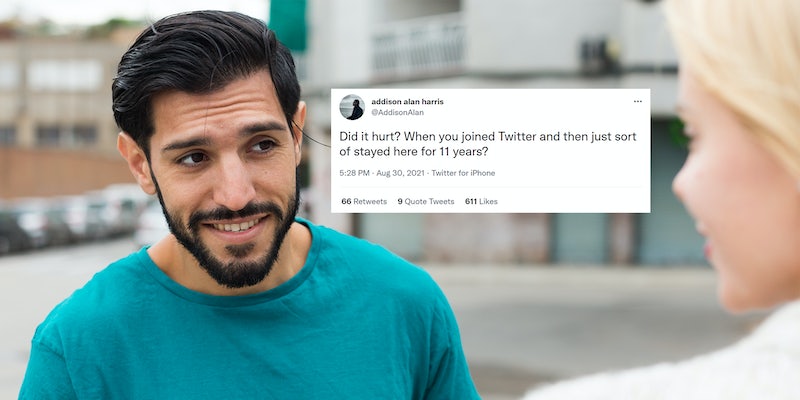 ‘Did it hurt’ meme turns a pickup line into a takedown

No movie line or college major is safe.

Has the pickup line “Did it hurt? When you fell from heaven?” ever really worked? It’s hard to say. But that line is getting a new life online as Twitter transformed it into a scathing (and even self-deprecating) take-down.

For years, that particular pickup line has been the epitome of cringe; if it was used at all, it was usually in a way that mocked itself (or pickup lines in general). The two-sentence structure, one with a common question, the other with a cringe-worthy response, is part of what makes it perfect for a snowclone, or the kind of phrase that includes a line or words you can easily replace with something else.

While plenty of snowclone iterations of “did it hurt” emerged over the years—variations of “did it hurt when you fell from the vending machine? Because you’re a snack” have been around for a while—Know Your Meme traced the origin of the new meme to @bratzcokeden’s tweet from July.

The meme became much more ubiquitous in August as one iteration of the phrase, which was posted by @thisyearsgurl, referenced another trend taking over the internet: the milk crate challenge. Here, the “did it hurt” line turns literal because, for many of the people who attempted the milk crate challenge, it ended with participants crashing to the ground in some kind of pain.

Like any good snowclone phrase, “did it hurt” spawned countless spinoffs referencing everything from what we studied in college and pop culture to song lyrics and real-life scenarios.

And, naturally, brands got involved—as well as a Twitter spat between the official accounts for New Jersey and New York City over bagels and pizza.

As the phrase catches on, chances are we’re going to see many, many more ways to ask us if certain things hurt, some of which may make much more sense than others. But given the reflection from the classic film The Princess Bride that “life is pain,” it never really hurts to ask.