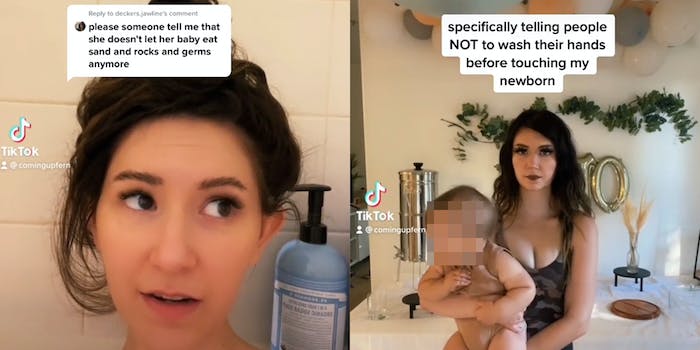 ‘I trust nature and my baby’: TikTok mom says she lets her baby eat wood, rocks, and dirt because she doesn’t trust science

'I do not fear bacteria.'

A TikTok mom raised concerns after she explained that she lets her baby eat sand and rocks to boost his immune system.

User @comingupfern has been sharing videos of her unconventional approach to parenting for awhile now, but a recent video from YouTubers Mr Beard and nickisnotgreen is drawing more attention to them—and raising questions about her decisions.

In one video from April, the TikTok mom explains that lets her “exclusively breastfed baby eat sticks, rock, sand, dirt, and unsanitized shopping carts.” The reason why, she says, is because she doesn’t trust the “billion dollar campaigns” by science and modern medicine that have “taken the world by storm.”

“I do not fear bacteria,” she says. “In fact, I welcome it. I trust nature and my baby.”

The TikTok has racked up almost 17 million views in the past four and a half months, although comments are turned off.

The YouTube video titled “This Woman’s Going to Kill Her Baby” highlights several other videos from @comingupfern, including one where the mom seems to call antibiotics “baby poison” and another where the baby appears to be about to chow down on wood chips he found outside.

“The scariest thing about this is that she’s not going to let her child have antibiotics,” Mr Beard says. “So while Fern is in the river, fucking sucking on rocks, and he gets an infection, she is not going to give him any antibiotics to help cure that infection.”

The YouTubers aren’t the first people to have concerns about this style of parenting or @comingupfern’s baby in particular.

Her videos about her baby eating vegan have gotten a fair amount of pushback, and a more recent TikTok on her channel featuring a text overlay explaining that she told people not to wash their hands before touching her newborn was met with mixed reactions.

“Must be underestimating the amount of people who have blood and feces on their hands,” wrote @guppyhead.

Another claimed they would wash their hands after touching the child, knowing what they know of mother and child.

And @jms1612 pointed out that “there are certain bacteria that a baby is susceptible” to with a new immune system.

“I can respect some people having different perspective and beliefs,” Mr Beard said after he and nickisnotgreen examined more of @comingupfern’s videos, “but when you’re to the point where you’re just letting your baby eat like, wood chips, which are going to pierce his intestines, and not giving him antibiotics to save his life, at that point, I feel like there needs to be some intervention, you know?”

The Daily Dot reached out to @comingupfern via TikTok comment.