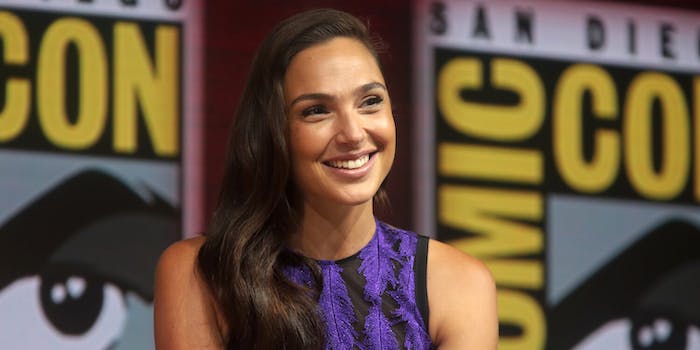 A cringe compilation for the ages.

Gift-giving is hard. Everybody has that aunt who always buys you cartoon-themed fuzzy socks or a nautical Christmas ornament when really, all you wanted was some cash or a Chili’s gift card. The intent was there, but the execution left a lot to be desired.

Gal Gadot did the same thing on Instagram last night.

The Wonder Woman star shared a video in which she reflected on the global impact of coronavirus and tried to bring some levity to the situation. “These past few days got me feeling a bit philosophical,” Gadot said. “It doesn’t matter who you are, where you’re from. We’re all in this together.”

Inspired by footage of an Italian man playing the trumpet on his balcony for his quarantined neighbors, Gadot broke into an a cappella version of John Lennon’s “Imagine,” before passing the torch to several of her famous friends. Lending their vocal talents to the video were Kristin Wiig, James Marsden, Sarah Silverman, Jimmy Fallon, Zoë Kravitz, Amy Adams, Will Ferrell, and Sia, among many others.

There’s no polite way to say this, but the video is… bad. Every celebrity sings in a radically different key (“sings,” “key”), and the awkwardly angled selfie videos radiate Big Boomer Energy. There are a few highlights—Sia is a vocal powerhouse as always, Marsden has an impressive vibrato, and Ferrell’s voluminous hair is a thing of wonder—but ultimately, this thing is a cringe compilation for the ages.

And Twitter users promptly roasted the hell out of it.

Viewers were crestfallen to see their favorite celebrities participate in such an excruciating video. Other people couldn’t bear to finish the whole thing. (It’s three minutes long!) The secondhand embarrassment was palpable.

Some Twitter users liked to imagine that their favorite celebrities would never stoop so low, as Gianmarco Soresi did with his spot-on Jeff Goldblum impression.

Needless to say, Gadot’s “Imagine” video was a well-intentioned swing and a miss.

Hopefully everybody who stumbled across Gadot’s “Imagine” video can unsee it quickly and go back to talking about Cats. Here’s hoping every member of the Instagram ensemble cast finds more productive ways to cushion the global impact of coronavirus.