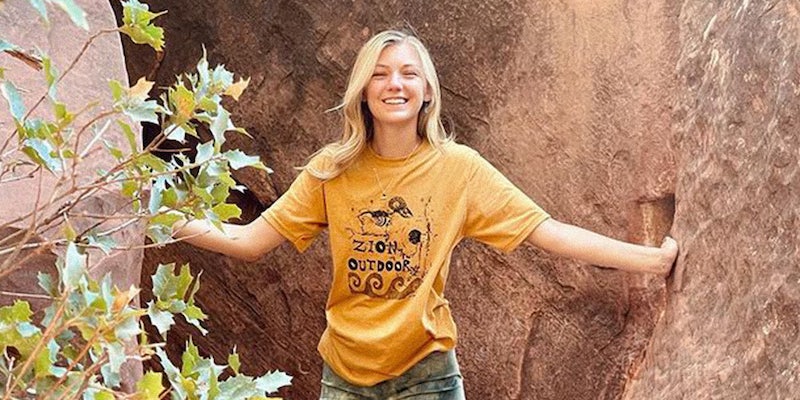 The obsessive media coverage and TikTok analysis showcase the dark side of true crime fandom.

The disappearance of Gabby Petito became a national news story partly thanks to TikTok, with internet sleuths theorizing about how the 22-year-old went missing. This attention led to potential breakthroughs in the case, including a TikToker who claims to have picked up Petito’s fiancé Brian Laundrie as a lone hitchhiker. But the obsessive speculation also attracted criticism—both regarding the dubious ethics of true crime fandom, and the racial imbalance in how missing persons cases are treated.

Petito disappeared while on a cross-country road trip with her fiancé, with Utah police reporting a “domestic problem” between the couple on Aug. 12. Petito made her last Instagram post on Aug. 25, Laundrie returned to Florida alone on Sept. 1, and Petito’s family reported her missing on Sept. 11. Laundrie, a person of interest in the case, hasn’t been seen since Sept. 14. Then on Sept. 19, a body matching Petito’s description was found in a forest in Wyoming.

This timeline was perfect material for what’s known as “Missing White Woman Syndrome,” turning a human tragedy into a subject of morbid public fascination. Strangers began to speculate about Petito and Laundrie’s relationship, delving into Petito’s Spotify history and sharing elaborate theories on TikTok. Much of this commentary sounded like fans analyzing a fictional TV drama. Petito’s disappearance had been absorbed into a subculture that blurs the line between crime coverage and entertainment.

True crime and the problem of ‘raising awareness’

When something awful happens, the one thing we can reliably do on social media is “raise awareness.” With missing persons cases, this can actually be helpful. But crowdsourced investigations can also go horribly wrong, misidentifying and harassing people who weren’t actually guilty of high-profile crimes.

The Gabby Petito case quickly turned into an obsessive scavenger hunt, spawning viral TikTok videos with titles like “Gabby Petito last text message sent” and “driving by Brian Laundrie’s home.” One TikToker racked up 7.9 million views with a theory about “DISTURBING FOOTAGE” on Petito’s YouTube channel. The footage in question just shows Brian Laundrie reading the sci-fi novel Annihilation, which (as author Jeff VanderMeer pointed out on Twitter) has nothing to do with missing women. This kind of response illustrates the toxic side of true crime fandom, failing to consider how public speculation might impact Petito’s loved ones.

The true crime genre has long been controversial. While something like Serial offers serious investigative reporting, plenty of popular true crime shows are more entertainment-focused, emphasizing lurid speculation and gallows humor. My Favorite Murder is the obvious example; a podcast that retells violent crimes in a comedic tone, and whose fanbase refer to themselves as “Murderinos.” It’s been criticized both for its inaccuracies and its bloodthirsty tone, accused of encouraging a skewed view of crime and the American justice system.

Much has been said about the demographics of true crime media and its audience. The most popular narratives prioritize grisly crimes, sympathetic victims, and white people. The stereotypical fan is a white woman, exemplified by the cutesy merch you’ll find on Etsy. Skewering the public response to Petito’s disappearance, one TikToker satirized the dark side of this audience: “Oh, you haven’t heard of Gabby Petito?” she exclaims, pretending to be a tone-deaf true crime fan. “Oh my god girl, you are missing out, this stuff is so good! I made a 28-part monetized series on my TikTok all about it.”

As the Gabby Petito news cycle picked up speed, more people began to highlight the racial disparities at play. “let’s get the same energy going to help locate #LaurenCho as we did for #GabbyPetito,” reads one viral tweet. “please take 5 seconds to read about Daniel Robinson, a geologist who went missing in the desert outside Buckeye three months ago,” reads another. Both highlight people of color who received a fraction of the media attention aimed at Petito.

The reaction to this kind of comment is often aggressively defensive: Don’t you want Gabby Petito’s family to find justice? Why are you making this about race? But the fact is that every missing persons case is a tragedy. When a case like this one attracts media attention, that attention can sometimes be helpful—and it can be harmful or counterproductive. And when the media ignores similar cases involving people of color, that underlines dangerous biases in our society. All three of these things can be true.