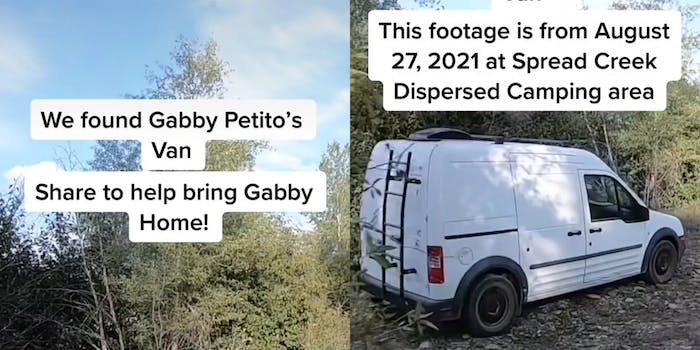 It may have led to the possible discovery of her body.

A self-proclaimed “average American family” traveling across the country by RV—and documenting it on both TikTok and YouTube—captured video footage of the white van believed central in the disappearance case of influencer Gabby Petito.

The Bethune family, who have a TikTok account and a YouTube channel as well as the redwhiteandbethune.com website, shared footage online over the weekend, appearing to be the van that Petito and fiancé Brian Laundrie were using for their own documented cross-country trip. As the Daily Dot reported last week, Petito’s family reported her missing Sept. 11 following Laundrie’s Sept. 1 return to the Florida town where they resided.

The case, which has gained widespread national attention in recent days, has a grim recent development coming on the heels of the Bethunes publishing their footage. On Sunday, a number of news outlets reported that searchers found a body found in Teton County, Wyoming, which may be the missing Instagrammer.

CNN noted that county officials will do an autopsy Tuesday to determine the identity of the human remains they found, and that the search is on for Laundrie—officially a person of interest in the case—who his family reported missing on Friday. Petito’s family reportedly believe he is in hiding, not missing.

Joseph Petito, Gabby’s father, posted what appears to be a memorial tweet on Sunday, indicating that his worst fears may have been confirmed even before the autopsy commences.

The video posted to TikTok by the Bethunes on Sunday declared, “We found Gabby Petito’s van,” showing footage from Aug. 27 from the Spread Creek Dispersed Camping Area in Bridger-Teton National Forest on the eastern edge of Grand Teton National Park—the site of the search for Petito’s body. It has generated more than 4.4 million views since going up on the platform.

The Bethunes also took to their YouTube channel Saturday night to post the raw footage of their travels in Grand Teton that produced the video.

According to the Independent‘s review of the footage, Kyle Bethune narrated, “This is at the Spread Creek dispersed camping area. We got there and there was a huge gravel lot and we decided we wanted to try to drive more toward the back because we’d heard the views were better back here. So we were heading back on this long dirt, gravel road.”

“And we came across a white van that had Florida plates, a small white van,” said his wife Jenn Bethune, picking up the story. “We were going to stop and say hi because we’re from Florida too, but the van was completely dark there was nobody there so we decided to continue on our way.”

As Kyle Bethune then put it, regarding their revelation that this might be in the van in question once the case gained media momentum, “We just kind of had a brain fart—‘Oh my God, there’s the van’—so if anybody can help I know the FBI is looking for all the help they can get onto the case.”

Viewers shared their thoughts about the case, as they’ve done with Petito and Laundrie’s Instagram posts that documented their travels.