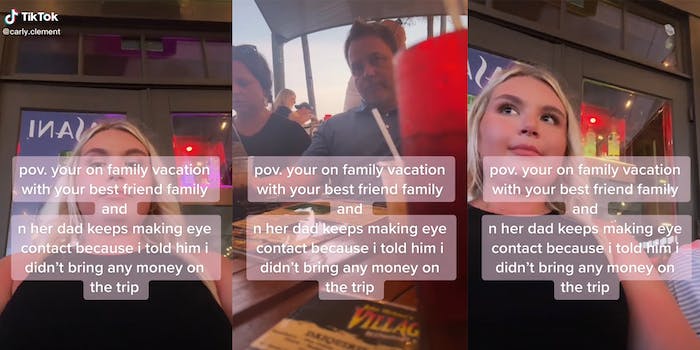 ‘If ur older than 18… immediately no this is wrong’: TikToker says she didn’t bring any money on friend’s family vacation, sparking debate

'Her dad keeps making eye contact because I told him I didn't bring any money on the trip.'

A TikToker sparked a debate with her claim that she brought no money to pay for any of her expenses while joining a friend on their family vacation.

While the TikToker later revealed the claim was intended to be a joke, the video was viewed over 2.2 million times, and commenters are debating the ethics of solely relying on a friend’s family while being their guest on a vacation.

TikToker Carly (@carly.clement) filmed her friend’s father sitting across the dinner table from her at a restaurant, claiming that he is making eye contact because she just told him she didn’t bring any money.

“(Point of view you’re) on family vacation with your best friend’s family and her dad keeps making eye contact because I told him I didn’t bring any money on the trip,” text overlay on the video reads.

However, in follow-up videos responding to comments on her first video about the trip, @carly.clement says she “had money the whole time.” She also commented on the video itself, making it clear the video about her friend’s father was a joke.

“You say that like you made it obvious it was a joke,” one commenter replied.

“Is it a joke or is that ur excuse because you didn’t get the reaction you wanted?” another questioned.

Either way, commenters discussed whether it would be fair to expect a friend’s family to cover them while on a vacation. Some felt it was fine to expect food to be covered by the family they were traveling with.

“Anytime I was invited on vacation the parents paid for dinners, I brought extra for like a sweatshirt or (something)?” one commenter wrote. “But food? No.”

“Not everything, but food if she’s invited yes,” another commenter wrote.

“My friends family always paid for my food since they invited me, if I wanted anything extra like souvenirs that was for me to buy,” a third echoed.

Others felt adult travelers joining another family’s vacation should contribute to their expenses.

“This is only valid if you’re 16 or under,” one commenter wrote. “A invitation for green room, travel expenses etc., doesn’t mean free food lol.”

“I wouldn’t even be comfortable going without my own money,” another said.

“Y’all yeah you can expect them to pay but you still gotta bring money in case they don’t or like at least offer to pitch in,” a third said.

The Daily Dot has reached out to @carly.clement via Instagram direct message regarding the video.

Update 2:33pm CT July 2: In a voice call with the Daily Dot, Carly said she had the idea to joke with her friend’s dad Jeff, who she is very close with, that she hadn’t brought any money to pay for dinner. Carly says the joke was misconstrued by viewers as saying she didn’t bring any funds at all on the family vacation.

“Personally, the responses kind of shook me up at first,” Carly said. “I kind of was stuck on the comments like, oh my god, people are being so mean to me. But then I had to remind myself, I posted a video for the whole world to see, possibly, and it just so happened to actually happen. I only had 170 followers before that.”

She added that, while she received a large number of hate comments, she isn’t the “spoiled brat” that some viewers accused her of being.

“People don’t know me, but I was a missionary last year,” she said. “I took a gap year after I graduated high school, and did missionary work in New York City for 10 months. Then I became a dental assistant right when I got back home. I’m very sweet and kind and generous, as people would know me. The world doesn’t see me as that so they think I’m a spoiled brat, so at first it really did shake me up.”

“I never thought I would post a video and all my comments would be hate comments, but you know, people don’t know who I am at the end of the day,” Carly concluded. “And they don’t see the things I do behind closed doors.”