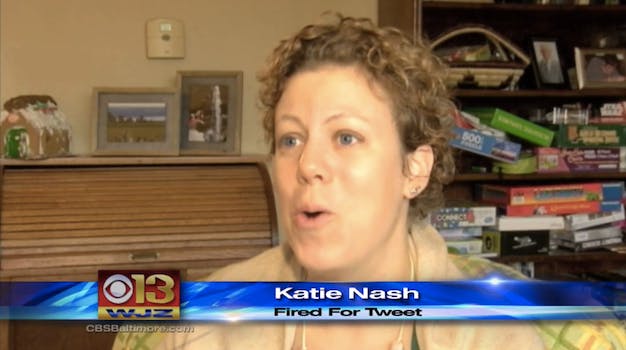 School administrator roasts a kid on Twitter, promptly gets fired

Somebody call the burn unit.

Time was, you misspelled a word in class, a teacher would rap your knuckles with a ruler until bone was exposed and win a Teacher of the Year award for that kind of quality lesson plan.

How things have changed.

A Frederick County Public School employee in Maryland lost her job last week after playfully roasting a student on Twitter.

The exchange went down on Jan. 5, with “Nathan” hitting up the county’s Twitter account to plead for classes to be canceled the next day.

Only he butchered the spelling of “tomorrow.” 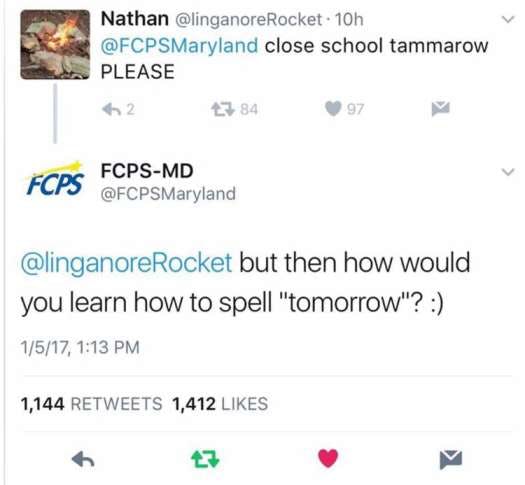 The county’s Twitter account fired back, with good reason. No kid hits the books on a snow day. Little more school, little less Nintendo DS might be good for Nathan (and all of the students of Frederick County).

The account was run by Katie Nash, who was fired for the tweet once it started to pick up steam online.

Nash was the account’s social media manager, and she told WHAG that students wanted a playful tone online.

Nash was right. Owning is the language of the internet. But higher-ups within the county felt her tactic was too harsh and let Nash go.

“Dear Katie,” a letter from the county read, “this letter confirms our discussion today that your probation period as a Web Experience Coordinator for Frederick County Public Schools will not be extended. You will be terminated from your assignment effective January 13, 2017.”

Shame. We can all agree that was a good web experience. Even Nathan thought so.

The county’s Director of Communications said that he personally apologized to the student.

For what it’s worth, FCPS schools opened with a two-hour delay on Jan. 6.