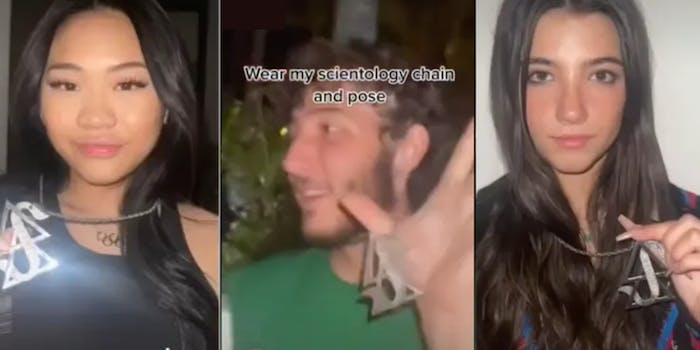 ‘So hilarious how clueless they all are’: Frankie Jonas posts TikTok of influencers flexing with a Scientology chain

Suni Lee, Noah Beck, and the D'Amelio sisters all apparently took the bait.

The video was reportedly posted by Jonas on his TikTok account, on which he is known to post some pretty interesting content, but has since been deleted. Other accounts have reposted the video, making it go viral once again.

“Wear my Scientology chain and pose,” the overlay reads. Jonas holds up the chain with the infamous S woven into double triangles hanging on the end. It then cuts to shots of famous and semi-famous young people wearing the chain and posing with it.

Viewers are assuming that those posing for the photos are unaware of what the necklace symbolizes.

“Its actually so hilarious how clueless they all are,” said @molls_k8.

Many were quick to point out the possible negative impact this would have on their statuses.

“You just KNOW their agents are having a meltdown rn,” @inflatablesteve commented on one of the reposted TikToks.

“They’re all losing their brand deals after this 😭😭,” wrote @fakefran69.

“NOT SUNI LEE 😭😭 girl get OUT OF THERE,” said @kaygottago.

Others are calling Jonas out for “setting them up.”

“I’m just so upset he brought suni into this like leave her alone,” wrote @tay.delaneyy.

“BYE NOW WHY HE SET THEM UP LIKE DAT,” commented @ilovesza789.

The Daily Dot reached out to Jonas via TikTok for a comment but has not yet heard back. We’ve also reached out to representatives for the D’Amelios, Suni Lee, Lil Huddy, and Noah Beck.