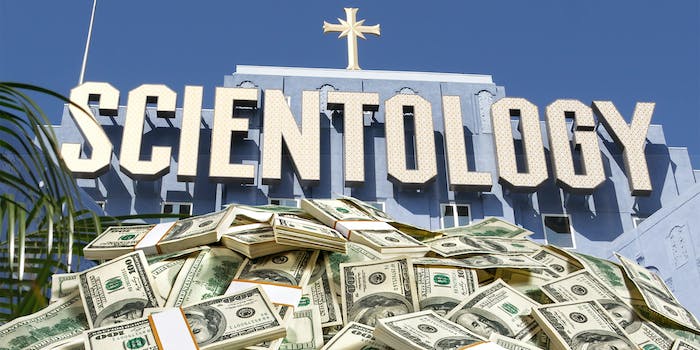 Church of Scientology, worth billions, took at least 30 PPP loans

The Church of Scientology and businesses operated by Scientology have received at least 30 different Paycheck Protection Program (PPP) loans worth approximately $4 million, according to government PPP data released on Tuesday.

As of this writing, the Daily Dot has identified 30 loans, while continuing to search under the names of many other Church of Scientology-operated companies.

Data initially released in July showed the Church of Scientology received three loans, but updated figures and disclosures of all loan amounts under $150,000 gave a clearer picture of Scientology’s windfall from the PPP program.

Science fiction author L. Ron Hubbard founded Scientology in 1953. Though legal battles with the IRS eventually resulted in the government declaring Scientology a tax-exempt religion, critics characterize it as a scam that makes adherents “pay their way” to attain spiritual freedom.

It had twice previously lost its tax-exempt status with the IRS. Though it’s free to receive government funds, the Church of Scientology has a fraught relationship with government finances, having long refused to pay taxes rumored to be over $1 billion and having attempted to infiltrate the IRS with spies. Members of the church went to prison for stealing documents from the government.

The Way to Happiness Foundation in Glendale, California, which promotes Hubbard’s guide to a successful life, received approximately $33,000.

According to PPP rules, organizations are only supposed to receive one loan. However, the program was rushed and contained minimal information as to what constitutes just one loan and one company. ProPublica has reported many organizations received hundreds of millions of dollars under their sub-LLCs. The Church of Scientology seems to have similarly done so.

PPP may be one of the most chaotic financial bailouts in United States history, according to government accountability experts. The program has been rife with fraud.

Religious organizations are eligible to apply for PPP loans under the terms of the program, similar to any applicant, and regardless of the windfall and largesse of their overarching religious umbrellas.  PPP loans, however, were supposed to be geared toward helping keep small businesses afloat.

Scientology’s estimated worth is approximately $2 billion.

The Church of Scientology did not respond to a request for comment.