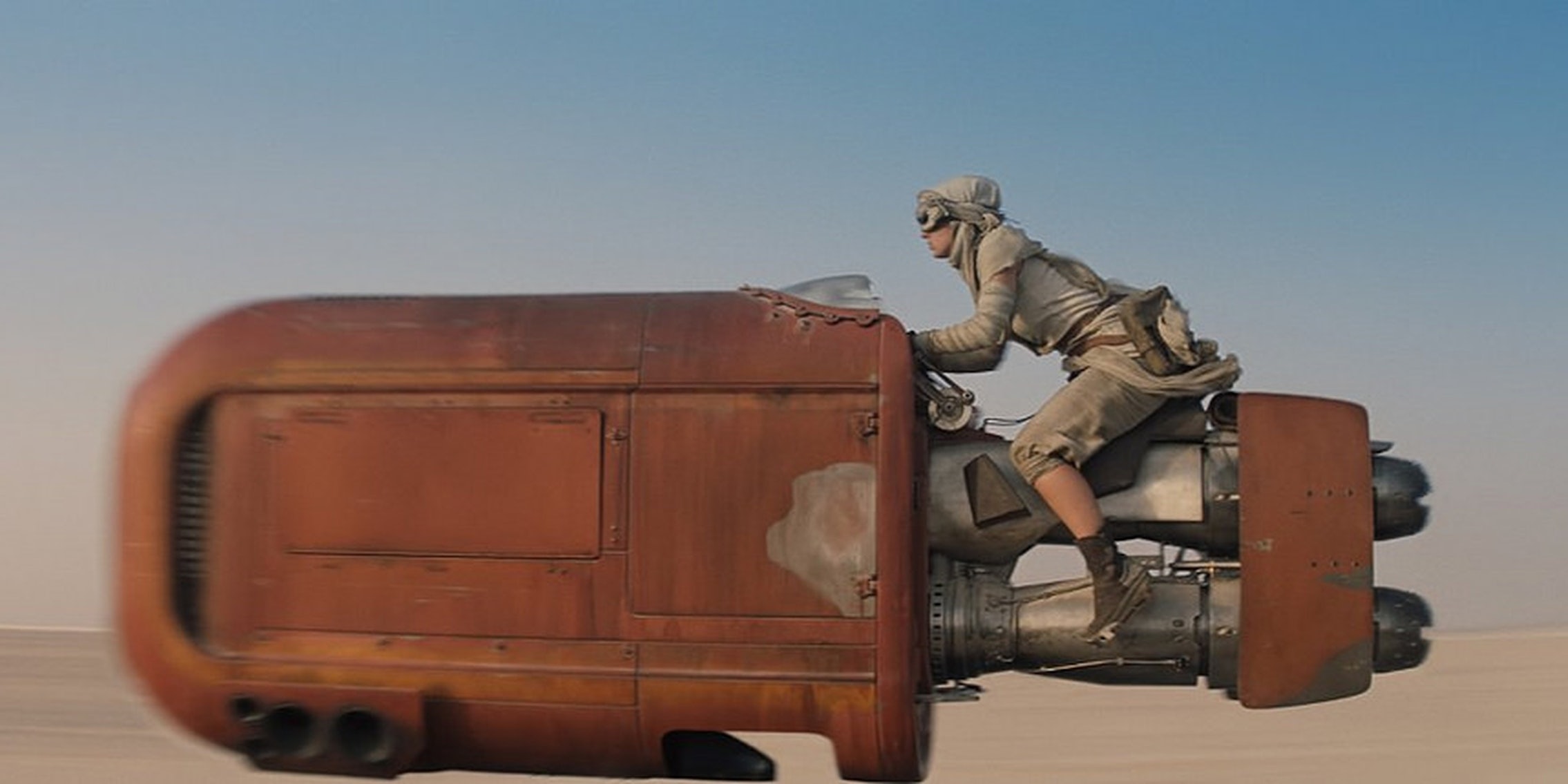 Why racial diversity in the new ‘Star Wars’ trilogy matters

A new generation of kids getting hooked on Star Wars can finally see themselves in the leads.

The trailer for the long-anticipated new Star Wars movie, Star Wars: The Force Awakens, dropped last Friday and nearly broke the Internet as predicted. As a lifelong Star Wars aficionado, I waited eagerly for the new trailer just like everyone else. I was perched near my computer like a small child tiptoeing down the stairs to see if Santa had arrived early on Christmas morning. Also as predicted, there were plenty of sites posting their shot-by-shot analysis of the trailer the moment after it dropped on iTunes Trailers. There were some that blasted the trailer and some that were overjoyed. The response was divided—one of the film’s main stars even got his own backlash the moment the trailer dropped.

As I was watching the first official live-action Star Wars footage in nearly ten years unspool right before my very eyes, there was something I noticed right away that brought a huge smile to my face. No, it wasn’t the homages to the original movies (although those were incredibly cool) such as the appearance of the Millennium Falcon or the breathtaking imagery of X-Wings flying above water. It was the first image that we see: That of Attack the Block’s John Boyega in a dusty Stormtrooper outfit.

After that, we were subsequently introduced next to Daisy Ridley, presumably playing “Kira” (although that’s not been confirmed), riding what looks like a cross between the infamous land speeder from Star Wars: A New Hope and a fudgesicle. Then we see Oscar Isaac from Inside Llewyn Davis fame wearing a Rebellion uniform and piloting an X-Wing. What do all these actors have in common? Boyega is a British Nigerian, Ridley is a woman, and Isaac is Guatemalan. None of these actors are a white male. These are the first faces that we see in this new Star Wars movie and then that’s it. We don’t see Harrison Ford as Han Solo, Carrie Fisher as Princess Leia or Mark Hamill as Luke Skywalker.

This is worth mentioning because it racially diversifies Star Wars for the first time in its nearly forty year history. John Boyega himself responded to the criticism with a single message on the actor’s Instragram: “To whom it may concern… get used to it.” In preparation for the new trailer, I watched all six Star Wars movies and I noticed how white-washed they all were. In the original trilogy, we have Lando Calrissian, played by Billy Dee Williams, who is introduced in The Empire Strikes Back as a supporting character who ends up betraying our heroes. Although he is redeemed in Return of the Jedi, he still only plays a supporting role throughout the movie.

In the prequel trilogy, the only non-white supporting character worth mentioning is Samuel L. Jackson as Mace Windu, who has a small role in the first two films. In Revenge of the Sith, he gets a slightly meatier role as he becomes leery of Anakin Skywalker’s relationship with Chancellor Palpatine. Windu ends up leading a group of Jedi to stop Palpatine, ousted as an evil Dark Lord of the Sith, but then is murdered by Anakin Skywalker (who is then later murdered by Hayden Christensen’s acting).

Sure, there are other ancillary characters that are non-white like Hugh Quarshie as Captain Panaka in The Phantom Menace or Jimmy Smits as Senator Bail Organa in the last two prequels. Other than that, though, the Star Wars series has mostly been known for having white leading characters since 1977.

The Force Awakens promises to change all of that, though. Which is why the first shot of the new trailer is one of my favorites. It almost feels like a mission statement that hopes to set the tone for the rest of the film. It’s important because we live in an era where Hollywood still white-washes its mainstream fare even to this day. For example, there’s been a huge amount of controversy over the white-casting of Moses and Ramses in Ridley Scott’s new movie Exodus: Gods and Kings. Screenwriter Travis Beacham said this on Twitter, which pretty much summarizes the controversy:

There are apparently more people of color in a galaxy far far away than there were in ancient Egypt.

When forced to address the issue, this is what Scott had to say: “I can’t mount a film of this budget, where I have to rely on tax rebates in Spain, and say that my lead actor is Mohammad so-and-so from such-and-such,” Scott says. “I’m just not going to get it financed. So the question doesn’t even come up.” Uh, okay.

Tell that to J.J. Abrams, who cast his big-budget movie with British Nigerian and Guatemalan actors. Or Joe Cornish, whose cast for Attack the Block consisted of mostly unknown black actors (which also starred Boyega). While Attack the Block was more an independent movie, The Force Awakens is anything but. As leaders of the industry (Scott has been making movies for over thirty years), such producers have what amounts to a duty and responsibility to create racial diversity in their work. It seems like Scott didn’t even try. If we wish to change the race and gender climate of Hollywood—so eager to fill screens with as many white males as possible as if they were taking cues from the CW—we must push for more actors of color and non-male gender.

Fortunately, it seems like some studios are starting to get more proactive about this issue. Marvel Studios, up until this point known for featuring movies with mostly white males, dropped news last month that Black Panther, starring Chadwick Boseman, and Captain Marvel (as yet uncast)—their first female-led superhero movie—would be coming out in 2017 and 2018, respectively.

But even as some studios, like Marvel, are starting to make changes, we are far from a racially diverse Hollywood. Take the most recent big-budget science-fiction film, for example, Christopher Nolan’s Interstellar. The movie was set in the not-too-distant future, with a blight threatening to ruin the environment of our planet, making it uninhabitable for humans. However, in this future, there are only two black characters: One, a tertiary character named “Principal,” played by David Oyelowo in a rather thankless role. The other, played by David Gyasi, meets an unfortunate fate a little more than halfway through the film. There are no Latinos, Asians, or anyone else of color in this future, where evidently all other races die out along with the crops. There are two leading female characters, but I was a bit surprised to see a future which is so unabashedly white.

This is why the racially diverse cast of The Force Awakens is so important. We need more movies—especially big-budget and studio-produced movies—that are willing to break the mold and depict a future that is more equal and diverse.

When I was a kid, I was inspired by Star Wars. I imagined myself as Luke Skywalker saving the galaxy. Now, in December 2015, in theaters all across the world, there are going to be kids—who are not just white kids, but kids that are black, Hispanic, Cuban, and more—that are going to be watching The Force Awakens on the big screen with gleaming eyes. This time, they will be able to find a lead character and resonate with them, much like I was able to when I was a small kid. They are going to leave that theater and nag their parents to go to Target or Toys ‘R’ Us to buy the newest John Boyega, Daisy Ridley, or Oscar Isaac Star Wars action figure and imagine themselves on a deep space voyage saving the universe.

Don’t forget that one of our most famous astronauts and leading physicians is Dr. Mae Jemison, the first African-American woman to go into space. If it wasn’t for Nichelle Nichols’ Uhura from Star Trek (who inspired her as a child), she might not have decided to become an astronaut in the first place. How awesome would it be if The Force Awakens inspires a legion of new youngsters to become the next Mae Jemison? In a time where we don’t often look to the stars anymore, just imagine a society—full of people of all races and genders—that decides to take the next big leap that could change the future as we know it.

The Force Awakens could be a positive force that awakens change, and as a society and culture usually so resistant to change, we would be better for it.