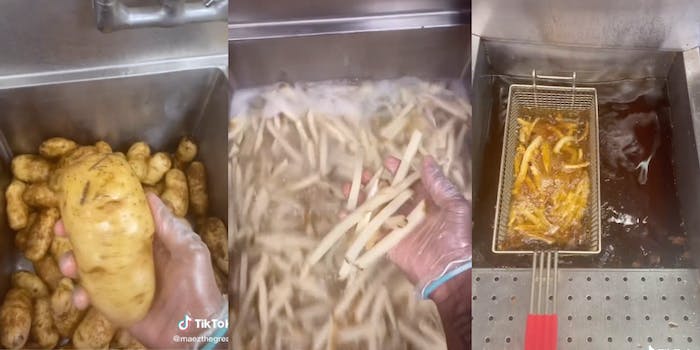 'This why they fries be SLAPPIN.'

Over the last few years, TikTok has become the official location for unveiling videos, behind-the-scene glimpses, and viral hacks. We’ve seen the secret behind dozens of fast-food menu items, like McDonald’s eggs and Jack in the Box tacos, and several recent videos now show how everyone’s favorite Five Guys fries are made.

The series of TikTok videos, from user @maezthegreat, are honestly revealing. No one was surprised to learn that Taco Bell uses dehydrated beans for their burritos, but plenty of viewers were shocked to learn that the process behind Five Guys fries begins with an actual potato.

According to Maez, this is precisely where the process begins. Real russet potatoes are loaded into an automatic slicer, which cuts the raw potatoes into long strips. The strips are then dumped into a bucket of water, before being transferred into a sink that gently rotates the soon-to-be fries, cleaning them of any debris and freeing them of extra starch.

Once the fries are all cleaned and de-starched, they are loaded back into a bucket and placed in the back for actual frying. Then the time comes to transform them from strips of potato into delicious, greasy french fries. According to Maez, this part of the process is quite simple. Employees simply grab several heaping handfuls of fries and pop them into a fryer. They are cooked for around two minutes, giving them the very beginnings of that crispy golden look we all love.

But this is just the pre-cooking process. Once an order is actually placed, an employee will take the half-fried basket and shift it to a new vat of oil, where the frying process concludes. After a few more minutes submerged and sizzling, the fries are removed looking browned and crispy. The completed basket is shaken precisely 15 times to remove excess oil and prevent the fries from getting “all soggy,” before the fries are dumped into a raised area for their final step of prep: the salt.

Once they are properly salted and mixed, a batch of fresh, delicious Five Guys fries is ready to be enjoyed.

People were absolutely stunned by Maez’s big reveal. Namely, viewers were shocked to learn that the process behind Five Guys fries is actually quite legitimate. Rather than rely on frozen fries or some pre-cooked soggy nightmare, Five Guys treats their fries with care. This led numerous commenters to conclude that “this why they fries be SLAPPIN.”

A number of people pointed out that this is why they frequent Five Guys over other “fast casual” options. “Yeah its expensive but you get what you pay for,” one commenter noted. “It’s real food unlike some places.”

This sentiment was shared across nearly every comment. People shared their love of Five Guys food and celebrated the fact that, based on Maez’s videos, it seems like the preparation process is legitimately better than most other options. Several other videos posted to his account see Maez cleaning the grill and emptying the grease trap, indicating that the Five Guys content is far from finished. He’s promising to reveal how the chain’s Cajun Fries are prepared next.

A number of people couldn’t help but take the opportunity to joke about the heaping helping of fries prepared by Maez over the course of his videos. Everyone who’s eaten at Five Guys knows that they absolutely refuse to skimp on the fries.

“That’s 1 small fry,” one commenter noted of the four—yes, four—heaping handfuls of fries Maez prepped in the video. “I made the mistake of ordering a large fry the first time I went.”

Numerous other viewers warned away from this practice, informing the uninitiated that a small fries from Five Guys is approximately the equivalent of a large fry—or two—from any other restaurant.

Everyone else noted in the comments section that the videos should be used as marketing tools for Five Guys, pointing out that “honestly I feel better about eating there after seeing these videos.”

“They better pay this man for advertising.”

The Daily Dot has reached out to @maezthegreat.