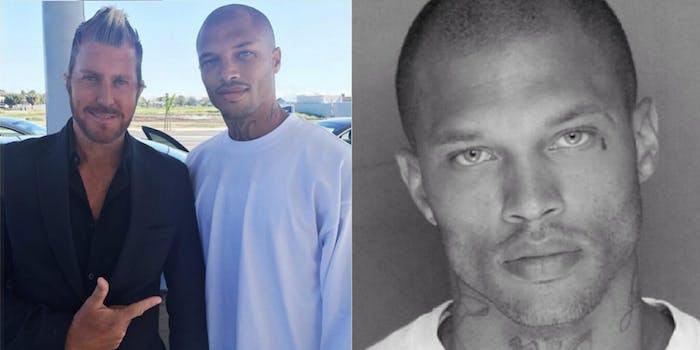 About to strike a pose.

Back in the summer of 2014, a man by the name of Jeremy Meeks gained some unexpected attention after his arrest on felony weapon charges. The Internet swooned over the light-eyed, strong jawed criminal’s handsome mugshot and propelled him to viral fame. Meeks became the Fine Felon—and now he’s finally out of prison, ready to launch his modeling career.

According to NBC Bay Area, “federal jail records show Meeks is in a residential reentry program in Sacramento.” He won’t be fully released until July 7, but Jim Jordan of White Cross Management has already started representing the Fine Felon as his modeling agent.

In a statement, Jordan said, “We have a lot in store regarding Jeremy’s new career. There are a multitude of offers on the table.” Meeks posted a photo of himself and Jordan to Instagram on Wednesday.

I want to thank my family and everybody for all your love, support and prayers. I'm overwhelmed and grateful for what lies ahead. I'm ready @jimjordanphotography and @whitecrossmanagement #jeremymeeks #jimjordan #whitecrossmanagement

Comments on Meeks’ Instagram posts range from fond wishes to total thirst. One fan wrote, “He so fucking gorgeous 😍😩” while another tagged their friend and said, “your kinda bad boy 😍😍.”

Another commenter tagged their friend wrote, “do you remember when this guy went viral a couple years ago? Now he is free and has a freaking modeling contract. Wtf are we doing with our lives.” (Answer: killing time on Instagram.)

Rumors had swirled that Blaze Models had approached Meeks about a modeling contract back in 2014, but according to Meeks’ family, no offer ever came through. With White Cross Management behind him, though, Meeks could indeed find his place in the spotlight.

The mugshot that made his reputation originally appeared on the Stockton Police Department’s Facebook page, where it’s racked up over 100,000 likes and 12,000 shares. Now it’s on White Cross’ website as part of Meeks’ portfolio—because arranging a photo shoot behind bars might be more trouble than it’s worth.