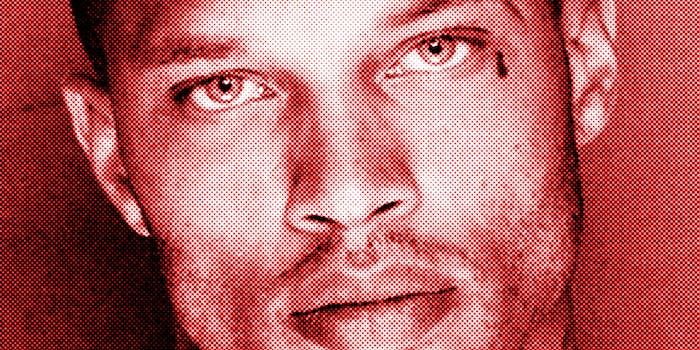 Too bad he can't make bail.

Jeremy Meeks, the handsome felon whose mugshot went viral after being arrested and charged with “street terrorism,” did not really get offered a modeling contract.

After his arrest, the Stockton Police Department posted his mugshot to Facebook, where it promptly went bonkers, mainly for his looks. Both men and women complimented his looks, and he was described as a “Devil with angel eyes.” He only found out about his new “fans” after a TV reporter told him about it.

Those jokes about his looks even turned into Photoshop gold as Meeks was placed into fake modeling ads.

Lmaoo I am sorry I just to laugh at the way his looks could have used in the fashion industry #jeremymeeks pic.twitter.com/shAYHm38Ln

👀 I mean maybe he has a future in modeling if he gets out…#jeremymeeks pic.twitter.com/WmpL8miOqN

Bruh I’m done this the nigha from the mugshot! 😂😂👏 females have no chill! #jeremymeeks #mugshot pic.twitter.com/EFBhieMcEk

But the Photoshop challenge could soon be a reality. TMZ is reporting that Meeks was offered a $30,000 modeling contract from Blaze Models, and he now has Gina Rodriguez, who also represents Tan Mom, as his agent.

Not bad when you’re still being held on $1.1 million bail.

Update: However, according to the family, Blaze hasn’t made an offer yet.

I called up his rep at Gina Rodriguez, and asked whether or not he had actually been offered any contracts, and whether Blaze specifically had offered him $30,000.

“We haven’t even talked to Blaze Management at all. We’re in talks with Jim Jordan from White Cross management,” a representative named Brandy, who declined to give her last name, which is how you know the company is legit, told me.

She did confirm that they are his management now, and that he is still in prison. They have no idea when he is getting out, she said.

Cool. So what about White Cross then? What do they have to say?

“We’re not representing him and not working with him in any way,” a man named Jeff, who also didn’t want to give his last name explained to me.

“We’d prefer that you didn’t even write that.”

Just remember, you did this, Internet.