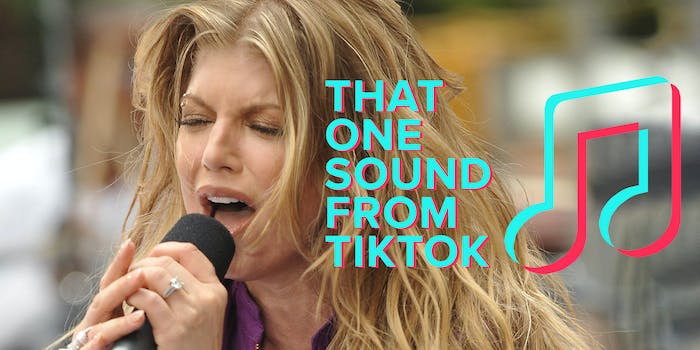 That One Sound: The chaotic energy of Fergie’s cartwheels

From cringe to inspirational.

This week, a sound that apparently lives “rent-free” in many people’s heads. It’s easy to see why: It can be an invasive sound, one that represents both joy and chaos.

This sound has been described as “unhinged” and “iconic.” One of the more popular versions of the audio was posted to TikTok in September, and it references trying to work a 9-to-5 job while having ADHD. It also includes the source material: Fergie performing live and doing a series of cartwheels while struggling to stay in key. It’s been used in more than 9,000 TikToks.

People got creative with their own cartwheel interpretations, which stemmed in part from the #fergiechallenge. The sound was also used to debunk misinfo.

A Starbucks employee posted video of their new mobile order iPads, and the graphic was… familiar.

The audio is from a May 2008 Today Show appearance, in which Fergie spiced up her cover of Heart’s “Barracuda” with four one-handed cartwheels during the breakdown. She then segued briefly into “Welcome to the Jungle,” she and attempted to twerk.

The sound later became popular on Vine. Fergie revisited the cartwheel during a performance with Heart last year. (This is apparently something she did with Heart and/or “Barracuda. MTV noted cartwheels during an April 2008 performance, too.)

When people wrote about the performance in 2008, the sentiment was mostly second-hand embarrassment. But the clip has persisted in the 13 years since, and now it’s become something that is more appreciated, even aspirational. Perhaps it was Fergie giving it all at 8:54am.