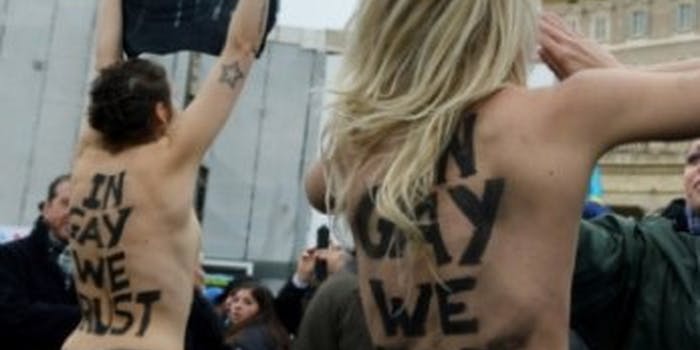 A group of feminists engaged in a campaign to Take Back the Rite on Sunday, disrupting the Pope’s regular morning mass at the Vatican by stripping off and yelling at Pope Benedict XVI to “Shut up.”

The protest is the latest in several staged publicly over the years by Ukranian group FEMEN, which takes issue with the Catholic church’s stance on gay marriage, adoption rights, and abortion.

Yesterday’s short-lived protest came the same day that the Vatican’s newspaper strongly condemned gay adoption. The paper was responding to the decision by an Italian court of appeals upholding the right of a mother to raise a son with her live-in female partner.

During the mass, four unidentified girls shed their tops to reveal and shout the message “In Gay We Trust!” They were quickly dragged away by Italian police, and an onlooker began beating one of the girls with an umbrella, reportedly shouting that they were “devilish and diabolical.”

Femen has performed public protests at the 2012 Olympics as well as participating in various political protests around the world last year, including a protest at the Russian EU summit against the presidency of Vladimir Putin, whom Femen labeled “an apocalyptic dwarf.”

The organization recently told the BBC that it has about 40 “topless” members active in the Ukraine, and approximately 100 more that have joined them across the world. The group has hundreds of more members in its home base of Kiev and elsewhere who remain fully clothed.

The group’s founder, Oleksandra Shevchenko, told the BBC that she believes the women are “ part of a new feminism” that emphasizes a woman’s complete control over her own body and the messages it sends.

Certainly nude protests are nothing new—they’ve been used by everyone from Slutwalk participants to international vloggers to protesters of budget cuts. The addition of an international, globalized branding that specifically uses bodies as billboards seems to harken back to the methods used by P.E.T.A. activists, a mix of sex and radical politics that Femen has dubbed “sextremism.” On their website, they describe a “Femen” as “the new Amazon” and describe its commitment to “attacking patriarchy, in all its forms:”

FEMEN – is the ability to feel the problems of the world, beat it with the naked truth and bare nerve. FEMEN – is a hot boobs, a cool head and clean hands. Be FEMEN – means to mobilize every cell of your body on a relentless struggle against centuries of slavery of women!

The commitment to topless empowerment is so firm within the org that they even shovel snow while baring it all.