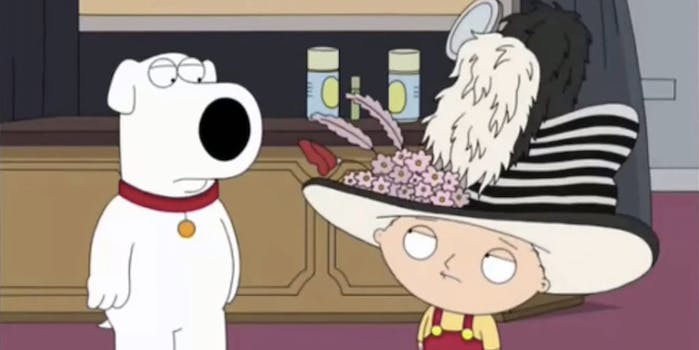 Is this joke tasteful or tactless?

One big theme emerged: People could not get over Caitlyn’s beauty. High praise came from Kim Kardashian herself:

And from new fans:

But while most of us are just getting to know Caitlyn’s new look, it turns out Jenner’s feminine side had a longtime fan in an unlikely place.

Way back in 2009, Family Guy aired a brief joke that insulted Jenner’s son, Brody Jenner. Stewie expresses disgust and disdain for Brody, asking how he could have emerged from Jenner’s body. Upon further pressing from Brian, who insists that Jenner is a man, Stewie insists that that simply isn’t true and praises Jenner, calling her a “woman, a beautiful Dutch woman.”

Family Guy is typically not known for tact, or kindness—and the joke as written looks to offend by mocking Jenner’s appearance, meanwhile suggesting that one needs a vagina to identify as a woman—but in light of her transition, the gag now seems almost sweet: