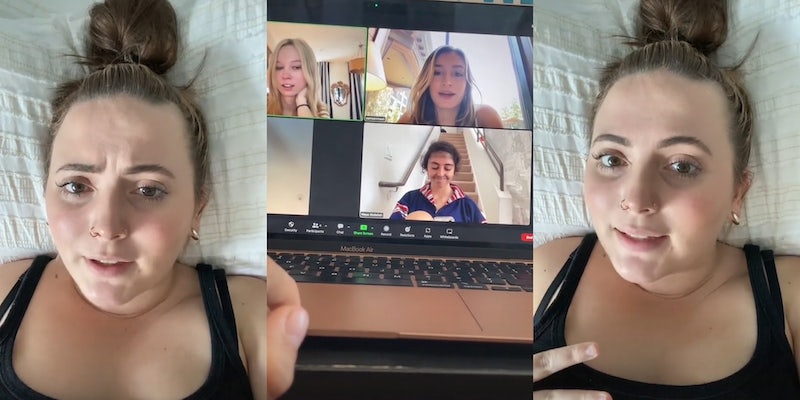 Woman says she was fired after awkward Zoom work call with boss. Another TikToker is calling her out for allegedly staging the whole thing

'That's the thing about social media—you never know if someone's telling the truth.'

A woman on TikTok says she was fired after a Zoom work call with her co-workers and boss, but another TikToker is now calling her out for allegedly staging the entire thing.

Maya (@mayuhnaise) shared a video in July that showed her joining a Zoom call while wearing makeup to look like her dad. She says she was filming a TikTok on her work break and forgot she had to attend the work meeting. When her boss asked her to turn on her Zoom camera, the boss and a co-worker laughed off her appearance. Later, her boss called her out.

That video went viral, with more than 27 million views and 4 million likes. Weeks later, Maya, a popular TikToker with over 1.7 million followers, shared an update explaining she was fired from her job because of the incident. In the update, she claims her TikTok account got banned just hours after she got fired and insinuates that her workplace was responsible.

Another TikToker, Ash (@ashley.oui), says Maya’s story about getting fired was staged for clout. She says it took her only 30 minutes to investigate Maya’s story and debunk it.

In Maya’s initial video, three other people are on the Zoom call. One of them has a blank screen and isn’t seen on their Zoom camera.

“It really wasn’t that hard to figure it out,” Ash says in her video. “You can read the names of the people on the Zoom call and search [them] on her friends list.”

Ash says she did just that and saw that the others on the Zoom call were Maya’s friends on social media. And they weren’t just friends who were also co-workers, she says. She says her “brief snooping” on Instagram uncovered that the Maya was “pretty much best friends” with the other two girls on the Zoom call. The third person, who wasn’t seen on the call, wasn’t a real person, according to Maya. One of the girls on the call had Zoom open on two devices to make it seem like there was a third colleague, Ash says.

“So that’s the thing about social media—you never know if someone’s telling the truth,” Ash says.

Ash’s viewers said they were glad she took the time to expose Maya’s alleged hoax. Some said Maya’s story seemed “fishy” from her first viral video.

“The whole story felt sus from the beginning, glad people are exposing her,” one viewer commented.

“Yeah the whole thing seemed fishy to me, thank you for your service,” a second viewer commented.

Some viewers pointed out red flags they noticed in Maya’s videos indicating that she had staged them.

“Also she said how her company is filled with boomers yet no one on that call was older than 30,” one user said.

“It was obvious when she filmed an intro vs taking two minutes to wipe off her makeup,” another user said.

“Why is she taking a work call from the stairs?” someone else pointed out.

“Not to mention- the email she posted had a subject line of “job update” and the date. HUH,” another user wrote.

The Daily Dot reached out to both creators via TikTok comment.