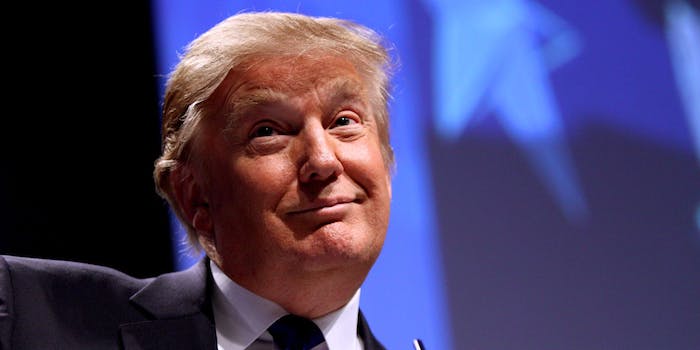 Donald Trump is so far beyond the realm of self-parody that we need new terminology just to describe him. He is nigh unmockable. But by god, we will try anyway.

If you follow Trump’s mesmerizingly awful Twitter feed, you’ll know that it’s mostly a mixture self-aggrandizement, weird public feuds, and retweets of random people calling for Trump to run for president in 2016. He also loves to quote his own books, which is probably why he felt the need to tweet this earlier today:

“@david_j_roth: “I was never one who looked at success as bad. For me, success was always good. I loved it, and still do.” Donald Trump

“I was never one who looked at success as bad. For me, success was always good. I loved it, and still do.” – Donald Trump, WINNING, pg. 27

Last night I made up a fatuous Donald Trump quote, attributed it to him, and he RT’ed it as his own. I’m finished: https://t.co/axInLeuSS4

On the one hand, this kind of thing makes you feel a little bad for Donald Trump. He’s just an old, weird dude searching for his own name on Twitter, apparently too forgetful to remember that he’s misquoting himself from a book that does not exist in real life.

Of course, then you recall that this is Donald Trump, a man whose main hobby is shouting about how awesome he is. And then it seems kind of legit to laugh at him for genuinely failing to tell the difference between his own words and satire.