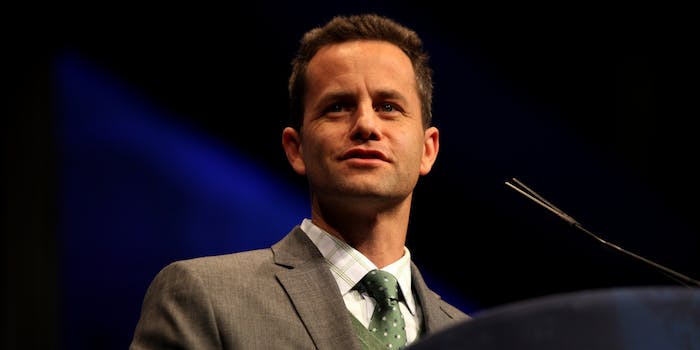 How faith-based movies are capitalizing on the culture wars

To say that faith-based movies are making a comeback is, to an extent, a misleading assessment of the recent spate of Christian films in moderate to wide release. (Note: For the purposes of this article, faith-based is going to mean Christian. If this has narrowed the scope, please leave a comment with evidence of other popular faith-based movies.)

In a fashion, the faith-based film never really left. For one, the recent Kirk Cameron productions like 2008’s Fireproof and 2011’s Courageous have found reasonable popularity in recent years using shoestring budgets and strategically targeted marketing. Most importantly, they did so by wearing their faith on their sleeves.

However, 2014 is already a clear boom year for the faith-based movie.

In addition to the runaway success of God’s Not Dead (sitting at $52 million and counting while still expanding into wider release), Sony’s Heaven Is For Real took advantage of an Easter release to earn right around the same amount; the Greg Kinnear-starring film looks to surpass God’s Not Dead within the week. In its second weekend, Heaven Is For Real finished a strong third at the overall domestic box office, coming just shy of overtaking Captain America: The Winter Soldier for second.

And that’s to say nothing of Noah, which wasn’t a faith-based film outright but offered a definite hook for interested audiences, or February’s Son of God, a film that made nearly $60 million despite being essentially recut footage from the History Channel’s miniseries The Bible.

The faith-based movie has returned to prominence and is enjoying one of its most prominent runs in quite some time, but why is this happening now?

Part of it, on a pragmatic level, can be explained by targeted marketing. In much the same way that most films aimed at a specific demographic typically see a boost from at least that demographic, a trend that can be used to explain anything from films aimed at geek culture to films targeting a particular ethnicity, faith-based moves cater to a segment of the audience that typically sees fewer films in wide release that caters to its sensibilities.

Particularly in a time where the “war on religion” is a topic of much debate online, it stands to reason that Christian audiences are hungry for films that offer some kind of representation of their discourses and their issues. Just look at the Cinemascores for a few of these wide releases: Son of God received a sterling A- from audiences, while Heaven Is For Real garnered the even rarer A.

Noah, conversely, got a C from audiences, in part because it wasn’t particularly good and arguably more so because of its yen for playing fast and loose with its source material.

This, of course, begs a larger discussion about why these films appeal to such broad audiences.

Faith-based movies aren’t making what they usually make this year. The high-water mark for a Cameron vehicle, for instance, is the $34 million Courageous made in 2011. This year’s crop is exceeding expectations, in large part because they’re a series of films that speak to issues of religious skepticism in a world that believers fear is becoming ever more secular.

From a narrative standpoint, Heaven Is For Real asks audiences to wholly empathize with a young boy’s near-death trip to Heaven, and to hope that the jaded adults around him will eventually come around to believing that he did indeed see something beyond death.

Son of God follows in a similar vein, re-staging the life and final days of Christ less viscerally than Mel Gibson did a decade ago, but with the central argument in tact: the believers will win out in the end.

And then there’s God’s Not Dead, which casts Kevin Sorbo as an atheist philosophy professor who draws the ire of a young student when he attempts to force his class to renounce God. Here, the culture war isn’t just implied, it’s the point of the film.

God’s Not Dead is a movie that often seems to be preaching to the choir (from a strict standpoint of filmmaking discipline, it’s also kind of a mess), but its current grosses indicate that it might not just be the truest of believers who’re flocking to theaters to see it. A lot of people are going, and so maybe its come-home message (one embraced by the Catholic Church itself in recent years) has a broader audience than usual.

And the train isn’t stopping, either.

Next week’s Mom’s Night Out is a new addition to the year’s slate, a comedy in wide release with Christian endorsements and underpinnings. In October the Left Behind franchise is being rebooted with Nicolas Cage in the lead, and in December, Ridley Scott aims to revive the big-budget Biblical epic with Exodus: Gods and Kings.

On a pragmatic level, a new demographic with clear buying interest has materialized, and Hollywood would be hard-pressed not to listen. Beyond that, it’s curious to see that in a time of suspicion and endless controversies, the religious movie has come home.

It could all go up in smoke in a year, but if doesn’t, what then?