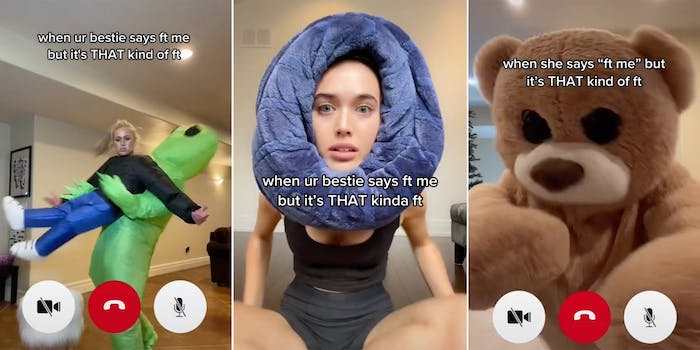 The many poses of TikTok’s ‘I hate him’ FaceTime trend

Audio from a 2013 episode of 'Degrassi' soundtracks this FaceTime trend.

This week, audio from a popular Canadian teen show informs a TikTok FaceTime trend that blurs the line between silly and serious. And it also begs the question: Do people really put this much production value into FaceTime?

The sound on TikTok mimics a FaceTime call, but when the call picks up, you can hear a woman screaming, “I hate him!” The trend involves TikTokers posing themselves in some absurd way while waiting for their “bestie” to pick up, before quickly realizing they need to be present.

People got pretty creative with different set-ups for answering the call. User sydwingold came up one of the most popular examples, wrapping her head in a blue blanket to give the appearance of a floating Thomas the Tank Engine. That TikTok has more than 64 million views.

People copied that trend, but also opened up the definition of a FaceTime call.

The FaceTime sound is just that, but the “I hate him!” audio is from a season 12 episode of Canadian teen drama Degrassi: The Next Generation, in which Maya (Olivia Scriven) breaks down over the suicide of her boyfriend Cam, saying she hates him for what he did.

It’s a genuinely emotional scene. On one TikTok about the origins, commenters pointed out the irony of the sound being used in such a goofy way when the original context is much more serious, though that can be applied to so many TikTok sounds. This audio has been around TikTok for at least a year, but this FaceTime trend took off in the last month.

There’s a related FaceTime trend going around, featuring audio of someone saying “I’ll call you back,” and someone else saying, “Alright.” Then, after a beat: “That bitch ain’t calling me back.” While one trend depicts the start of a call, this illustrates the awkward ending of one.