If you aren’t logged on, you miss out on that ongoing memorial.

At what point will the dead outnumber the living on Facebook?

Conventional wisdom suggests that there are more people alive today than have lived in the sum of history, but that’s not exactly true. According to estimates, Earth has housed around 100 billion people since the dawn of man—more than 10 times the number living right now. As the numbers show, the dead have a way of accumulating.

The longer you are on Facebook, the more dead people you will be friends with. A friend from high school passed four years ago, and his parents regularly post updates about him as a way to stay connected with those who loved him. Friends often tag photos of him or use his Facebook wall to remind him that they’re thinking of him and miss him. His Internet social life is just as active as its ever been. 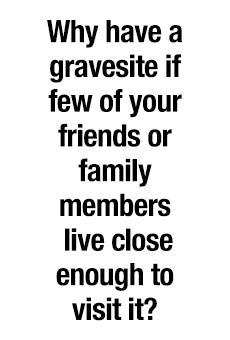 My best friend died this weekend, just over a month before her wedding day. She’s been getting married for four years, about half the time I’ve known her. As her wedding day approached, her apartment became filled with 12-packs of Coca-Cola for the reception. Her fiancé claimed they were on sale. When you walk in the front door, the boxes are just about all you can see.

Her fiance found her face down in bed over the weekend. She had an enlarged heart. No one knew this until she wouldn’t wake up. Her fiance shook her; she didn’t move. This wasn’t unusual. Planning a wedding is exhausting. He started to slap her and scream her name; she didn’t respond.

He says that her big heart was what he loved about her most and repeating this fact, the Nicholas Sparks version of her death, helps him keep time as he makes sense of her belongings, collecting jewelry and clothing. To be in the apartment of someone that has recently died is a reminder that eventually someone is going to have to pack up all of your stuff for Goodwill.

They always say that we live on in other people, but we also live on in the margins of our books, the name we leave inside the cover. If you were an Egyptian pharaoh, you could wall your belongings up inside your tomb, as cargo for the afterlife. But you can’t take it with you.

She didn’t want that. She wanted to be cremated. Her fiance referred to the burial as “putting her in a box,” turning up his face at the idea as if a plot in a cemetery were the ultimate act of conformity, an eternal subdivision. He plans to scatter her ashes in Italy instead, where they intended to go on their honeymoon.

In the past 15 years, the cremation rate has more than doubled. Other than the romantic aspects of being scattered to the winds, there are a lot of practical reasons why someone would want to be cremated. Not only is it cheaper, but being buried also makes less sense in a society that’s increasingly geographically diffuse. Why have a gravesite if few of your friends or family members live close enough to visit it?

Facebook has filled this gap in accessibility, giving us the ability to stay connected to those who are no longer with us—a digital shrine owned by Mark Zuckerberg. In Dead Souls, Nikolai Gogol imagined a Russian society where dead serfs could be bought and sold like a commodity good. In 18th century Russia, collecting the departed could be a highly lucrative business.

Facebook doesn’t sell our loved ones back to us. Instead, it gives us continued access to them, and in the case of those who are cremated, it’s the only way we can visit them. Facebook is becoming an increasingly important component of peoples’ deaths—not only how we process loss but how we remember them. If you aren’t logged on, you miss out on that ongoing memorial. 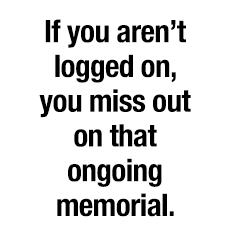 But there’s a consolation to not being logged onto someone’s death: It forces you to get involved. When my friend died, I had no way to send her my private condolences in a direct message or see her one last time before the service—I’m not on Facebook. So I booked a bus ticket to go to her. I didn’t have Facebook to create a timeline of memories for me. I had to make my own.

I don’t think there’s a right or a wrong way to grieve, but Facebook, in general, has a way of making us both more and less connected to the world, as we often mistake our number of friends for the depth of our relationships. Mourning someone can be as simple as leaving a condolence message on their wall. It means we don’t necessarily have to engage—or even go to their funeral. Haven’t we already said goodbye?

At its best, Facebook should make us closer to the people around us, both the ones we’re putting to rest and the ones that gather to remember them. The days after are a reminder that we persist, even when the very act of existing hurts. The living might not outnumber the dead, but we have to collect their things—and we have to figure out what it means to stay alive.

They say that funerals are for the living. Facebook should be, too.