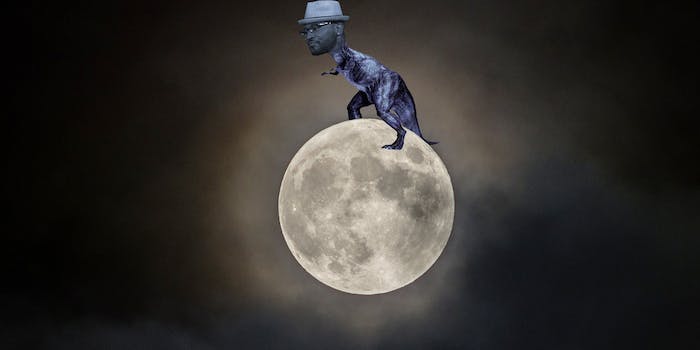 Here's the amazing saga of how this came to be.

The bots, automated computer programs designed to take in information from other Twitter users and then spit out responses based on pre-determined algorithms, weren’t specifically intending to sniff out the star of How Stella Got Her Groove Back. Instead, a combination of Diggs’s truly bizarre social media strategy and a network of absurdist bots working in tandem managed to create one of the greatest things to ever happen on the Internet.

Here’s how it all went down.

Earlier this year, tens of thousands of Twitter users received an unexpected surprise when they discovered Diggs had started following them.

In the big leagues. Got the Taye Diggs follow! pic.twitter.com/6wPOz43t4R

The vast majority of these people had nothing to do with Diggs’s dual provinces of Hollywood and Broadway—they were politicians, athletes, and even a few Daily Dot staffers. Diggs’s massive follow spree was a head-scratcher, at least until he explained it in a interview with the Today Show‘s Matt Lauer.

Diggs said he had hired a “social media dude” to help build his personal brand online. “He gave me a bunch of people that I was interested in, from athletes to people in politics and just a whole bunch of people. And then he started following people for me,” Diggs explained sheepishly. “And now whenever I want, I can just look at my phone and just hear what’s going on with all these people.”

Sure, it’s a little disappointing that the once-coveted Diggs follow was just weirdly broad way to promote his new TNT drama Murder in the First and doesn’t actually mean all that much. But Diggs’s social media manager’s indiscriminate following was what connected the actor to a Twitter account called @exosaurs. That’s when the real fun started.

@exosaurs sprung from the imagination of computer programmer Rob Dubbin. One of Dubbin’s hobbies is making Twitter bots. His most famous creation is @OliviaTaters, which functions by smashing together two random tweets around a shared adverb like “actually” or “literally.” Dubbins initially thought Taters would produce nonsensical gibberish, which wasn’t incorrect, but it turned out that gibberish sounded a lot a hyperactive tween.

y do boys my age like girls who are useful and one of the core documents within a company. extremely underrated, specially on it.

just needed to say: i am amazingly incapable of flirting bc i am an actual robot

Earlier this year, the Daily Dot turned Taters into a political pundit by asking her a bunch of questions about the consequences of 2014 midterm elections:

It’s not an exaggeration to note that Olivia Taters’s analysis of the post-2014 political landscape was far more informative than anything anyone has said on CNN in at least a decade.

@exosuars isn’t quite as popular as Taters, but the concept behind it is equally brilliant. @exosuars works by taking the people who follow it and then turning them into space dinosaurs with names pulled from a list of exoplanets (meaning planets orbiting stars other than the sun) discovered by NASA’s Kepler space telescope and a list of dinosaur genera.

After discovering @exosaurs, Robin Sloan had an idea. Sloan, a California-based writer known for the New York Times bestselling novel Mr. Penumbra’s 24-Hour Bookstore, realized that the only thing cooler than space dinosaurs are the people who ride those space dinosaurs. He created his own Twitter bot, @exoriders, that uses a list of Finnish names to create heroic Saturday-morning cartoon characters brave enough to strap saddles on the space dinosaurs spit out by @exosaurs.

@Exosaurs Exocorporal Atso shall ride Aaron Sankin across the charred savanna of HD 147018 b. http://t.co/AhutSox5O3

@Exosaurs DPFC Virpi shall ride Taye Diggs through the deadly canyons of omicron CrB b. http://t.co/4RTapAl8xn

“I thought the [exosaurs] concept had a really great ‘flavor’ to it,” Sloan recalled. “To me it seemed so clearly evocative of like, an ’80s animated TV show. So I decided to actually take it there.”

Sloan had made another Twitter bot in the past, a now shuttered Netflix recommendation bot, so he knew how the process worked.

“The key decision here was that my bot would listen to Rob’s and specifically reflect/refract the content of each Exosaurs tweet, building on it like one of those ‘exquisite corpse‘ drawings. To name the Exoriders, I found a random webpage full of Danish names and pronunciations, and when you’re making a Twitter bot, odd structured lists like that are gold. It took about half a day to get Exoriders running to my satisfaction, and then I set it loose.”

With @exoriders, Sloan was taking Dubbin’s one-off joke and starting to build an entire world around it. But worlds, even fictional ones created by robots, don’t simply exist in stasis. They move in time and, as a result, produce stories. For as long as there have been stories of any kind, there have also been love stories; so, a few days after Sloan unleashed @exoriders, Dubbin responded with something called Mounting Tension, or @exoslash.

@exoslash is a reference to something called “slash fiction,” which is a specific type of steamy fanfiction in which people write their favorite characters into romantic entanglements. The term specially applies to male-male pairings—deriving from the genre’s Star Wars ur-text, Kirk-slash-Spock.

While @exoslash doesn’t necessarily confine itself to algorithmically creating snippets of gay space-dinosaur romance novels, the effect is something that brings the whole @exosaurs universe full-circle.

A bunch of robots just wrote a story about two lonely cartoon cowboys who gaze longingly at each other while a space dinosaur version of the guy who played Dr. Sam Bennett on Grey’s Anatomy looks on.

It’s probably important at this point to pause for a moment and consider that the above tweet is an actual thing that happened.

This type of intra-bot interaction isn’t unique to the world of space dinosaurs. It happens quite frequently with bots that pull in images, distort them in a particular way, and then send the reformatted picture back into the Twittersphere. Such as this back-and-forth from earlier this week:

@pixelsorter Let's play! And don't worry – I will automatically end this after a while. pic.twitter.com/hMIvKHX94k

This type of intra-bot interaction isn’t unique to the world of space dinosaurs.

While these sorts of interactions are interesting, Sloan appreciates that the exosaurs bots are structuring semi-coherent worlds out of seemingly random data rather than just injecting more randomness into the universe.

He pointed to @lawandorderexo, another Twitter bot that incorporated exosaurs and their attendant exoriders into true-crime scenarios—until it was discontinued last year.

A Turanoceratops gets killed, leading to an investigation into exosaur trafficking

When Gobiceratops legend John Bailey Owen is drugged, local exoriders demand a ransom, and the investigation becomes a race against time

“I will say that the thing I still love most about the Exobots is that their interactions aren’t chaotic/anarchic; there is a sense of a world being sketched out (however thin and, at this point, repetitive),” he noted. “I think the idea of a network of bots, made by different authors, all riffing on one another and contributing to a shared fiction is hugely exciting.”

Correction: The article originally listed the exoriders’ names as Danish. They are Finnish.