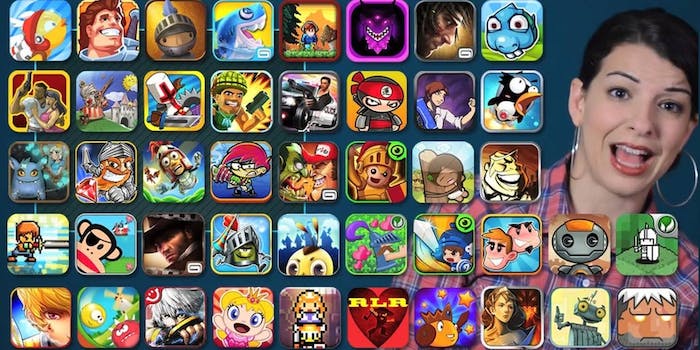 What every conversation on women in gaming is really about

Anita Sarkeesian has 99 problems. They are all misogyny.

Multiple scandals are brewing this month over women in video games, as Anita Sarkeesian and Zoe Quinn face horrific abuse from men who are opposed to their opinions and commentary on video games and game culture. Both women have been subjected to a stream of abuse from male gamers and the men who support them, including the revelation of personally identifying information, threats of violence, and, in Sarkeesian’s case, threats so extensive that she’s been driven out of her home. Both women are facing the inevitable consequences of the culture of male entitlement cultivated in video games.

Gaming culture is vast and complex, but a constant running theme in games is one of male entitlement and the idea that men—both inside of the game and out—deserve women in a way that many women (and those working in solidarity with them) find deeply off-putting. We’ve all read about how, for example, female characters tend to be scantily clad and forced into impractical garments. We’ve been told that coding female characters is impractical. We see game after game where violence against women is a major theme—and women are raped and murdered to advance plots. The idea of rescuing the princess is a core component in even games designed for young children, further cementing the idea of women as weak, helpless objects.

The tropes of games—and by extension, gaming culture—feed one simple idea: Men are entitled to women. This happens when gamers sit down to play, but it happens in other contexts, too. It happens on gaming forums, where men exchange crude and misogynistic commentary about women. It happens at cons and events, where the notorious “booth babes” are an important part of the culture and where women who work as exhibitors and promoters complain about sexual harassment. Women who actually work in video game design and development have numerous horror stories to tell about abuse within the industry from male developers—and from without on the part of gamers.

In discussions about the misogyny of gamer culture, many point to issues like the desire among many women to hide their gender in online gaming to avoid harassment and to not identify their gender explicitly on forums for the same reason. More than that, though, the core of gaming misogyny isn’t just about hating women. It’s about cultivating a twisted attitude that male gamers deserve to have women—and that women are property.

In that climate, it’s perhaps not surprising to see considerable anger in the male gaming community when women push back on these ideas or when women get actively involved in game development.

Sarkeesian hit the gaming radar in a big way in 2012 with her “Tropes vs. Women” series, which promptly resulted in the creation of a game called “Beat Up Anita Sarkeesian,” where players were invited to deal out black eyes and other severe injuries to an avatar of the gaming commentator. She was forced to disable comments on YouTube and take other steps for self-protection, and she was still flooded with a constant stream of misogynistic bile every time she spoke out on and offline about sexism in gaming.

This summer, it came to a head when she released a video talking about a common trope: Women as background decoration in games. The result was a backlash of comments so severe that she finally broke her silence on trolls and posted examples of abusive comments she was receiving on Twitter. She felt so unsafe that she left her home—and the abuse also threatened her parents. It included identifying information, enough of a credible threat to take the issue to the police, which she did.

As Adi Robertson notes at The Verge:

The threats against Sarkeesian have become a nasty backdrop to her entire project—and her life. If the trolls making them hoped for attention, they’ve gotten it. They’ve also inexorably linked criticism of her work, valid or not, with semi-delusional vigilantism, and arguably propelled ‘Tropes vs. Women’ to its current level of visibility. If a major plank of your platform is that misogyny is a lie propagated by Sarkeesian and other ‘social justice warriors,’ it might help to not constantly prove it wrong.

Meanwhile, Zoe Quinn, designer of Depression Quest, has been facing misogynistic abuse of a slightly different color—she’s been accused of sleeping with a game developer to increase the profile of her game. It’s not the first time women have been accused of “sleeping to the top,” suggesting that they’re incapable of succeeding on their own merits.

Claiming that they’re exposing “corruption,” male gamers from forums like 4chan are zeroing in on a series of spiteful posts made by Quinn’s ex-boyfriend, and they’re running with them. They’ve phone her parents, made abusive videos, and filled the Internet with commentary on Quinn’s alleged corruption. As with Sarkeesian, the commentary on Quinn has included personally identifying information and very explicit threats.

At Slate, David Auerbach pointed out the feedback loop that emerges with these cyclical attacks on women in gaming:

The entire situation is a dismal feedback loop of rage and abuse, where the harassment gets Quinn and her game more media coverage, and the harassers take that as evidence that they were right all along—something that’s already happened to Quinn several times over the past year.

“Because I’ve had a small degree of success in a specific subculture,” Quinn writes, “every aspect of my life is suddenly a matter of public concern. Suddenly it’s acceptable to share pictures of my breasts on social media to threaten and punish me. Suddenly I don’t have any right to privacy or basic dignity. Suddenly I don’t get to live out normal parts of life, like going through a bad and ugly breakup in private. I have forfeited this by being a blip in a small community, while those who delight in assailing me hide behind their keyboards and a culture that permits it, beyond reproach.”

She cuts to the core of the “criticism” of female gamers, gaming critics, and developers: Inevitably, it all winds back to a sense of male privilege. Men prefer to imagine that they can have their gaming playground to themselves, and they’re offended by the presence of women in their sandbox. They don’t want to be disturbed by the notion of female players and developers, and they resist criticism of sexism, harmful tropes, and other issues in games.

Their attitude is fed by the culture they live in. This isn’t just an issue of larger social sexism and misogyny: Gaming culture, as it stands, fosters male entitlement, and at times, actively encourages it. When men do speak out in solidarity with women, as Wil Wheaton did, they, too, become targets for misogynistic men. That’s a telling illustration of how determined many male gamers are to resist criticism.

Gamers, and the gaming industry, have repeatedly been told to fix their misogyny problem . The fact that this is still an issue speaks to how systemic it is and how the dominant cultural values in gaming prize the comfort of men over the very idea of discussing women in gaming. As long as gaming’s toxic masculinity remains intact, it will be impossible to have a functional conversation about sexism and misogyny in games, let alone the way women who talk about games, work in the industry, or play games (and there’s considerable overlap between these groups) are treated.

Illustration via Tropes vs Women